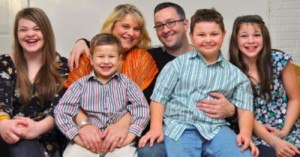 The Pete Radke family, left to right, Hannah, 16; Isaac, 8; Michelle, Pete, Owen, 10; and Brynn, 14. Radke of Medina died after rescuing a young girl from the waters of Huntington Beach in Bay Village on Saturday, May 31, 2014.

Today’s Akron Beacon Journal carries a story about a memorial fund that has been established to help the family of Pete Radke, a member of Grace Church Bath Campus, a Grace Brethren congregation in Akron, Ohio (Jeff Bogue, senior pastor). A portion of the article appears below. Click here to read the complete story.

Memorial funds have been established to help the family of a Medina man who died Saturday after saving a teenage girl from the rough waters of Lake Erie.

Pete Radke, 43, was with his two daughters and some of their friends celebrating one daughter’s birthday party at Huntington Beach in Bay Village, when a 16-year-old girl from Georgia was in distress in the water, authorities said.

Radke and others went to assist the girl. It is unclear exactly what happened, but eyewitnesses say Radke pushed the teen toward safety amid high waves crashing over rocks. He then disappeared into the water.

The girl, whom Radke did not know, survived, but not before struggling more in the water. . . .

Friends have started two funds for the family. One fund, www.peteradkefund.com, will accept Paypal donations. Contributions also are being accepted at Fifth Third Bank in the “Peter Radke Fund” and at Chase branches under “Michelle Radke, Account 2986259782.”

A separate Facebook fundraising campaign also had raised nearly $14,000 as of Tuesday evening.

Fred Hartman, a childhood friend of Radke’s, said the goal is “to provide ongoing, long-term support of the family.”

“Pete was a meek, mild-mannered individual, which was such a rare thing these days,” Hartman, of Medina, said. “I was with him in private and public settings and pressure settings, and he always held it together and was a shining example to us. . . . He loved his family, and he loved his friends. To have somebody genuine like that is just a rare thing.”

Radke, a Berea native, was a social media specialist at Akron-based Hitchcock, Fleming & Associates. He also owned his own small business, RocksTech, which provided technology services to small companies in Northeast Ohio.

Calling hours will be 3 to 8 p.m. Friday at Grace Church’s Bath campus, 754 Ghent Road. Funeral services will be 10 a.m. Saturday at the church.