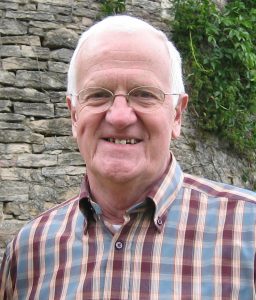 Pastor Larry A. DeArmey went to be with his heavenly father Wednesday, July 1, 2020, at 6:30 a.m. He is survived by his wife and ministry partner of 53 years, Vicki DeArmey (née Shirey); one daughter and four sons, Ginette, Marc (with wife, Abeba), Luc (with wife, Leah), David (with wife, Louise), and Mathieu (with wife, Lis); and seven grandchildren, Amanuela, Temperance, Lucia, Jude, Pierre, Zoe, and Adrielle.

Larry and Vicki served for more than 37 years as Grace Brethren (now Encompass) missionaries in France and later Spain, planting and growing two churches in Mâcon and Lyon, and working alongside other missionaries in a church plant in Madrid, Spain. As European Missions Coordinator, Larry often traveled to other European countries and the Chad to teach and counsel missionaries serving in those countries. Even after retiring to the United States in 2007, and up to October of 2019, Larry traveled many more times to Moundou, Chad, to teach Chadian pastors and leaders at ESEM (École Supérieure D’Études Missiologique) and to Florida and Haiti, to teach in Haitian-led churches.

Many friends, colleagues, and spiritual children in Europe, Chad, and Haiti are mourning the loss of Larry alongside his family, friends, and colleagues here in the United States.

An open memorial service will be held at 2 p.m. (EDT) on Monday, July 6, at Grace Polaris Church, 8225 Worthington Galena Rd, Westerville, OH, 43081. A private family viewing will be held prior to the service.

The service will be livestreamed from the newly-renovated Worship Center at Grace Polaris Church. It will likely begin 5–10 minutes prior to the start time of the service.

For those who wish to tune into the livestream of Larry’s service: visit GracePolaris.org/Watch shortly before the service begins. The video will begin playing automatically when the livestream begins.

For those who wish to watch the video after the service concludes: visit Vimeo.com/GracePolaris to find the on-demand version of the video. The video should be available immediately after the livestream concludes.

In lieu of flowers, you may donate to one of the projects dear to Larry’s heart. For an online memorial gift to the work in Haiti, click here. For a gift to the work in Chad, click here. If writing a check, make payable to Encompass World Partners, with “DeArmey Memorial” in the memo line, and which project is preferred. Mail to: Encompass World Partners, Box 3298, Monument, CO 80132.

Condolences may be made to the family at rutherfordfuneralhome.com.

Click here to read the tribute to Larry DeArmey by Encompass World Partners.