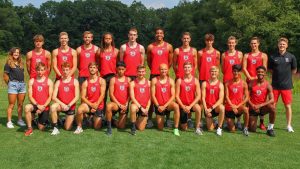 The definition of any of those words is what Coach Jake Poyner hopes describes his men’s cross-country squad. After being one of the youngest teams mentioned in the NAIA polls a year ago, the goal for 2021 is to show continued improvement and establish a place among the elite teams in country.

“We’ve been using the phrase, ‘It takes what it takes,’ to talk about the process needed to reach our goals,” said Coach Poyner. “This is a group of men who have the incredible opportunity to do something really special. We want to be firmly planted in the top 25, so we’ll need to go and prove that we deserve to be there.”

With a team featuring four sophomores and three freshmen in the top seven, the Lancers reached the No. 24 spot in the NAIA polls last season. They went on to place fifth in the Crossroads League Championships, a league that boasted three top 10 teams in the NAIA and had six different schools ranked at some point during the year.

Junior Bryan Hernandez-Rios returns after earning All-Crossroads League honors and just missing NAIA All-American recognition with a 45-place national finish and a personal best 8K time of 25:36. He went on to earn an All-American spot in the 3,000 meters during indoor track season and broke school records outdoors in the 5,000 and 10,000.

Three other juniors will help form the core of the team. Dimitri Margaritidis has a career best time of 26:55 in the 8K and is coming off a stellar track season that saw him anchor the distance medley relay to NAIA All-American honors indoors and place fourth in the 1,500 outdoors. Logan Rufenacht has run 26:42 in cross-country and joined Margaritidis on the distance medley relay during indoor track. Isaac Beatty, already a four-time All-American in track, has a best of 26:56 in cross-country.

“We are coming off an exciting and empowering track season,” said Poyner. “If our group of juniors can stay healthy and put themselves in the mix on race day, there’s a special capacity there for holistic excellence. This is already a top-notch group of men in terms of their character, their faith, and empathy towards one another. The final component is lacing up and celebrating their hard work.”

Several other upperclassmen will help provide leadership on the team. Seniors Maurice Macklin and Derek O’Connor transferred to Grace a year ago and made an impact in both cross country and track. Brothers Kyle and Luke Smith, also seniors, have been part of the Lancer soccer program for three years, but will train with cross country this season. The Smiths, along with Macklin have been on NAIA All-American relays during track season for the Lancers. Junior Zach Johnson battled through injuries a year ago, but was a top seven runner in 2019.

Several sophomores will play key roles for Grace. Dakota Ames, Macallister Cheek and Hayden Mullett were in the top seven for the Lancers at the end of last season, while Nate Woolery came on late in cross-country and continued to improve during the track season. Marston Norris and Dominic Turkstra also return, while Tanner Sallee—an All-American in the 4 x 800 relay during track season—joins the team after being part of the soccer program last season.

“I really believe this group understands the power of every guy having a role on the team. When the top seven succeed, the other thirteen all played a part in that accomplishment,” commented Poyner. “The athletic diversity we have is a beautiful thing when everyone has each other’s backs. I believe some of our newcomers, along with our sophomores, will exhibit their development and maturation mid-season this fall once we begin racing.

“It will take what it takes, and this team is accepting the challenge with an emboldened and gritty attitude.”