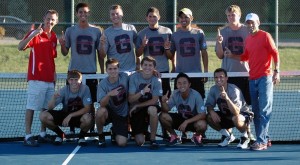 The Lancers completed their successful title defense with a 6-3 win over Marian on Wednesday.

Grace, who will share the regular-season championship, will await next week’s tournament draw for the 2013 Crossroads League Tournament. The Lancers will be either the No. 1 or No. 2 seed, depending on the result of Friday’s Indiana Wesleyan/Spring Arbor match.

“I could not be more proud of the guys. This was a great season from a record in points to winning conference for the second year in a row. This is a great bunch of guys who look out for each other and who seriously desire to glorify God through tennis,” said Grace head coach Larry Schuh. “We have had great leadership in our captains Michael Humphrey andAaron Blevins. They were an example of integrity and competitive perseverance the whole season.”

Read the rest of the story here.