MEYERSDALE – A former major league baseball player, Sid Bream, will be the featured speaker at the annual Game Supper to be held at 6 p.m. Jan. 14 in  the Meyersdale (Pa.) Grace Brethren Church Activities Building.

The location is at the rear of the church, which is located at 112 Beachley Street.

The supper is open to the public and is free, although a free will offering will be taken to help defray expenses. Reservations are required and the deadline is Jan. 9.  They can be made by calling the church at (814) 634-5980. The menu will include a wide variety of donated wild game and fish in addition to other meats. Several door prizes will be awarded.

According to a news release from the church, there are two things that Bream has truly enjoyed in his lifetime other that his relationship with Christ and his family.  One of these was playing major league baseball for 10 years. In those 10 years he had the opportunity to play in four National League championship series along with two World Series. In his days of playing he was known for his dramatic slide in the seventh game of the league championship series against the Pittsburgh Pirates which sent the Atlanta Braves to the World Series in 1992. 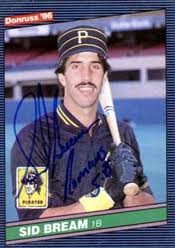 He was a Pittsburgh Pirate from 1985 to 1990 after playing for several years in the Los Angeles Dodger organization. Bream retired during the baseball strike after signing with the Houston Astros in 1993. Now, nearly 20 years after the moment frozen in time that denied the Pirate fans their last real chance to reach the World Series, Sid has accept that as part of his legacy.

The other passion in Bream ‘s life is hunting. He is an avid bow hunter who has hunted most of North America along with two trips to Africa. He loves to talk about God’s handprint in the creation He has given us, along with life’s lesson from his father.

Bream was born in Carlisle, and grew up as a St. Louis fan. He and his wife Michele have four children. His oldest son Tyler is an up and coming third baseman in the Arizona Diamondbacks organization. Youngest son Austin starred for a Seneca Valley High team that won the WPIAL championship last season.

Sid has also served as hitting coach for the Spikes, the Pirates minor league affiliate in State College.

The Zelienople resident has also coached sandlot teams at Seneca Valley and worked with youngsters through a program known as Hitters, Hackers and Hoops. A group of youngsters also got instruction from Sid and son Tyler on – of all things – the art of sliding.  Sid comments that “leadership principles thru the truth of God’s word, along with examples thru baseball, can be taught as well”.

Randy Haulk, Grace Brethren pastor,  emphasizes that the Game Supper is open to the public, but it is important that reservations be made by the Jan. 9 deadline.