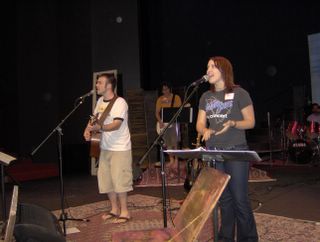 Pastor Mike Jentes of thequest in Columbus, OH, was one of seven young pastors who planned and implemented the recent DRIVEN conference for approximately 100 young Twenty-Somethings. Here is his wrapup report, which capsulizes well the week and its activities. (pictured, Ezra Wimberly, left, leads worship with the Norton North team)

More than one hundred Grace Brethren people gathered at Kenyon College in Gambier, OH for the first young adult conference in the FGBC from June 15-18, 2005. DRIVEN, as the conference was called, had a theme of Engage, Accelerate and Incarnate.

The three-day conference had an evening and morning session emphasizing these three components along with a variety of other opportunities.

Wednesday night kicked off the conference and started the Engage portion. An introductory plenary session with worship where the seven young men who provided the leadership for DRIVEN each got to share their heart about the theme and their passion for DRIVEN.

Then the conference was encouraged to partake in a variety of “experiential” worship expressions—varying from time alone with God to a recreation of a medieval prayer labyrinth. A late night “coffee talk” gathered people to converse with missionary Barb Wooler about “Your Wildest Dreams are Too Small.”

Thursday morning, after breakfast, started with a slate of workshops covering a variety of topics from “Societies Lies about Women,” to “How to get a Book Published,” to “HIV/AIDS, Africa & Orphans,” to “What is Truth?”

The morning main session was headlined by Dr. David Hoffeditz, Professor of Bible at Cedarville University, as he spoke about “Rules for Successful Engagement” from the story of Hannah in Luke 2. Roundtable discussions about the main session followed during the lunch time frame.

The afternoon time frames each day were free for people to mingle, chat, nap, or play some organized sports. The late afternoons had another spread of workshops available. After Supper the evening held another main session.

On Thursday evening, the “Accelerate” theme was launched with main speaker Jeff Bogue from the North Campus of Grace Church (Akron, OH). Jeff delivered a powerful message of running with abandon toward Jesus including a challenge around singleness and marriage from 1 Corinthians chapter 7.

A very meaningful time in round table discussions carried on into the night. A couple of late night options were a “coffee talk” with Dr. Tim Boal about “What does it mean to be called?” and an open mic/poetry reading time led by John Shirk from the Urban Encounter team in Chicago.

Friday morning continued the “Accelerate” theme during the main session as Neil Cole of Church Multiplication Associates laid forth a challenge to live the adventure of the Christian life and start a movement from 2 Timothy 2:2.

The musical worship for the week was outstanding. Ezra Wimberly and a team from Grace Church and recording artist Marc Andre served to catalyze the music during the main sessions. Prior to and after the main sessions, Chi-town DJ Sasha spun some records to set a fun tone. A sprinkling of video testimonies and punchy clips found themselves in each main session as done by Kate Ward and DRAW productions. In addition there were a couple of late night concerts from grassroots artists.

A huge highlight for the conference was communion was celebrated Friday evening. A short gathering and explanation about Communion and the Love Feast was followed by one of the most special meals of the weekend—starring prime rib as the main entrée.

After a sweet time of feasting the conference moved outside for some instruction and participation in foot washing. Then the body walked together to the civil-war era chapel to reflect and partake of the bread and cup. Communion was a beautiful and moving time of fellowship with Jesus and those gathered.

The Friday evening session speaker was Neil Cole again as he introduced the theme of Incarnate. Central to his teaching was the powerful picture of Jesus as presented in Philippians 2 and that God’s Kingdom is Inside-Out and Upside-Down.

DRIVEN ended late Saturday morning. The farewell address was about James Gribble, pioneer missionary to the Central African Republic, as presented by Dave Guiles. Gribble’s life brought out the call from John 12:24 “…unless a kernel of wheat falls to the ground and dies, it remains only a single seed. But if it dies, it produces many seeds.” This send off was a great conclusion to a stellar conference.

If you missed it, you missed it. It was a fabulous time all the way around. Stay tuned for details about DRIVEN in 2006.