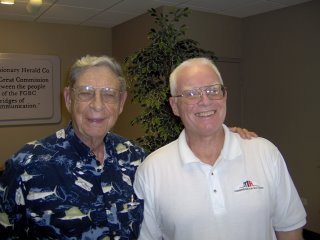 Ohio Pastor Ed Jackson (left) and Mike Stanley, from the Worthington, Ohio, church, recently visited Winona Lake and shared some dreams and hopes for the resurgence of a men’s ministry in the Fellowship of Grace Brethren Churches.

Stanley, who was featured in FGBC World’s story about Crusader Football in the September/October, 2005 issue (to read click on archived copies at www.fgbcworld.com), is the founder of Manhood in Action. Mike is ready to take the point position in the Brethren men’s work which Jackson founded many years ago.

To read more, click on www.manhoodinaction.com. Mike is available to do men’s retreats, or to be a speaker for events as schedule permits. The mission statement for Manhood In Action is, “A ministry for men of all ages that exists to encourage, train, and challenge Christian men to model genuine biblical manhood and to positively impact their circles of influence.”