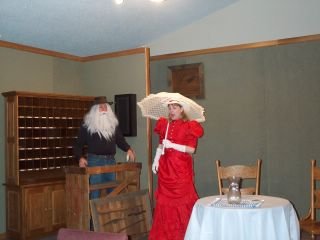 “Just because you have a small church,” says Roland Maust, “is no reason that you can’t have a big ministry.”

For the fifth year in a row, the Grace Brethren Church of Millersburg, Ohio, which has a membership of under 100 and is pastored by Maust, hosted its annual October Christian dinner theater.

The dinner theater, staged in the church’s sanctuary, offers a new presentation every year. The building has been variously transformed into a French cafe, a celestial courtroom, an oldtime radio studio, a spooky old house on an island, and (most recently) a hotel in Traildust, Arizona, in the late 1800s.

The yearly event is part of the outreach ministry of the Millersburg GBC.

“This is a threat-free environment that folks can bring their unsaved friends to to be entertained, and hear a clear presentation of the gospel at the end of each performance,” says Pastor Roland Maust. “We also have many Christians who love to come out for an evening of good Christian fun.”

The play has been directed since the beginning by Pam Skelly, and all the actors except one are attenders of the church. The cooking is done in-house by a team headed by Kathy Hart, and is carefully related to the setting of each play. This year saw a Southwestern spread of roast pork, tangy beans, cornbread, coleslaw, and a choice of Texas sheet cake or locally-made pies.

Starting with just one performance in 2001, the cast now puts on three soldout performances each season, and wonders what the future holds. But until the Lord directs otherwise, it will surely include reaching out to the people of Northeast Ohio through the power of drama.