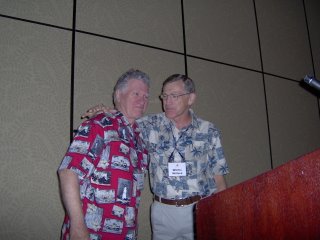 Rev. Lester Kennedy (left), pastor of the Fairlawn Grace Brethren Church in Radford, Virginia, was honored this morning by the Association of Grace Brethren Ministers with the “Lifetime Achievement Award” at the AGBM’s Celebrate06 meeting. His commendation was read by Whitey Willard (right) of the Lititz, PA, Grace Brethren Church, who was mentored as a young pastor by Kennedy.

Kennedy, who was born July 4, 1926, in Bassai, Central African Republic, came to the U.S. at age three. Attending school at Bob Jones University, Taylor University, and Grace Theological Seminary, he married Lois Hall in 1950 and was ordained to the ministry in 1951.

The Kennedys left for language study in France in August of 1952, and in 1953 went to the Central African Republic where they served as missionaries for six years. Three of their five children were born there.

Returning to the U.S., they pastored in Limestone Tennessee, for four years, and returned to Africa for an additional four-year ministry. Then Kennedy became pastor of the Grace Brethren Church of Buena Vista, Virginia, where he served for 17 years.

In 1985 the Kennedys began the work which is now the Fairlawn church in Radford, and he continues pastoring there today. Kennedy’s wife, Lois, was also present for today’s presentation, as were several of the other young pastors he has mentored, including Dan White, Jack Galle, Ron Smals, and Steve Shipley.