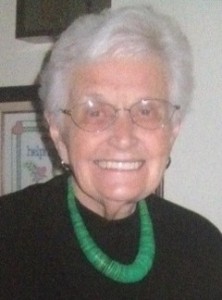 Miriam received her certificate from Banks Business College in Philadelphia in 1936; graduated in 1938 from the Bible Institute of Pennsylvania; in 1952 became an LPN from Kirkman School in Chattanooga, Tenn.; received her degree from Grace College in Winona Lake, Ind., in 1963, and her master’s from St. Francis University in Fort Wayne, Ind., in 1972.

She worked as an assistant in the Dean’s office of Bryan College in Dayton, Tenn. from 1945-1952. From 1952-1960, she worked as an LPN in a physician’s office and at a hospital. Miriam became the Associate Dean of Students at Grace College and Seminary in 1964 and remained in that position until 1985 when she retired.

Miriam had received many honors throughout her life. In 1977 she was Indiana Merit Mother of the year; 1981 Grace College Alumna of the Year; was in Who’s Who of American Women in 1983-1984; in 1985 received the Citation of Distinction – NAWDAC; and was Grace College Associate Dean of Students Emeritus.

Miriam committed her life to serving the Lord and was a member of Winona Lake Grace Brethren Church. from 1986-1996, she worked as a support missionary with Grace Brethren International Missions in Brazil and Africa.

No visitation is planned, a private graveside service will be conducted on Thursday, January 22, 2015, at Oakwood Cemetery of Warsaw and officiated by Pastor Bruce Barlow and assisted by Chaplain Bryan Benjamin.

Memorial donations in Miriam’s name may be directed to Grace College and Seminary – Norman Uphouse Scholarship Fund, 200 Seminary Drive, Winona Lake, Ind.  46590 and would be appreciated by her family.