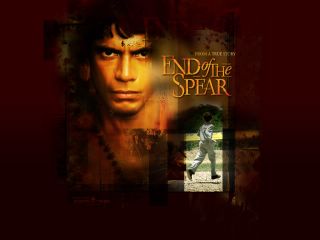 A major film called End Of The Spear will be launched January 20. I believe God will use it in a big way. It depicts the effects of the grace of God in very powerful and spectacular ways.

The story begins in 1956 when five Christian missionaries (Jim Elliot was among them) gave their lives in an Ecuadorian jungle, attempting to bring the gospel to the Waodani stone-age people. At that time they were the most violent tribe on Earth — and yet they became the most loving and peaceful!

The missionaries made friendly contact, but something went terribly wrong. The Waodani speared them to death. A tragedy? Yes, but God turns everything to good, for the blessing of many and for His glory, and this was no exception.

God used this tragedy to motivate more people to become missionaries than any other event in modern history — perhaps ever. He also used two women to complete the work of the five martyred missionaries, bringing the Waodani to Himself. So the deaths of those five men did more to advance the kingdom of God than their lives ever could.

God’s ways are so great!

But the story doesn’t end there. It seems God is about to use the tragedy that happened 50 years ago to help hundreds of thousands — maybe millions — to come to a saving knowledge of Him. It is a major motion picture (production cost $12 million) that tells the story of God’s grace from the perspective of the Waodoni.

Beginning January 20, End Of The Spear will be shown in theaters across the
United States. If it does well it will be accepted by many other theaters, but it must do well right from the start.

This is where you and I come in. We can help the film do well. Our prayers can make it prosper and we can e-mail others. Our connections are endless!

If each of us were to pass this information on to just 10 others (some can share it with hundreds!), and each of them did the same, our goal of getting 100,000 people to see the film on January 20 would be reached easily — and likely greatly surpassed! Just forward this to 10 caring Christian friends.

Making it even easier, great resources are provided. A Google search for “End Of The Spear” will yield several excellent web sites, including www.endofthespear.com

Then there is a special web site for Christians at http://www.daretomakecontact.com/. It offers lots of helps to help us promote the film and make it a huge success. You’ll really get the flavor of the film by watching the trailer.

What a great opportunity to advance the kingdom of God in such an easy, non-offensive and effective way!

By the way, the producers of End Of The Spear is ‘Bearing Fruit Communications’ http://www.bearingfruit.org/About/. They have more plans in the works to advance the gospel through similar means. Find them on their web site.

Let’s help make End Of The Spear a great success!

Thank you for your prayers and participation.