Missionary Keith Altig With the Lord 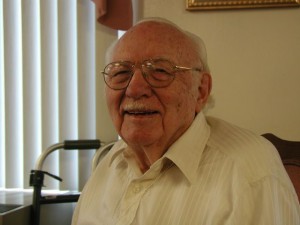 Memorial services will be held at Town and Country Manor Chapel, 555 E. Memory Lane, in Santa Ana, California. His wife Vivian preceded him in death. He is survived by two daughters and a son.

In lieu of flowers, the family has suggested memorial gifts to the building fund of the Duck Creek Community Church where son Steve is pastor (PO Box 1398, Duck Creek, UT 84762).

This photo of Keith Altig, veteran GBIM missionary to Brazil, was sent along by Pastor Ed Trenner, and was taken last April on Altig’s 94th birthday. Altig passed away Wednesday in California.