The following article about a program begun by the Grace Brethren church in Mississauga, Ontario, Canada, appeared on Mississauga.com: 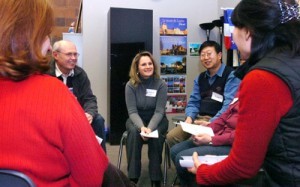 Settling in a new country can be very difficult, and for newcomers to Canada with limited English skills, the experience can be even more overwhelming, says Meadowvale resident Elizabeth Blair.
That’s why she recently started a conversational English class to help newcomers adjust. A dozen people meet every Thursday from 7-8:30 p.m. at the English Café, at the Grace Centre, on Campobello Rd. They practice conversing in English through various activities, including games. The sessions are free of charge.

“I started the program because of my own personal conviction,” said Blair, who has lived in Meadowvale for eight years. “Seeing the struggles my own mother went through (about 40 years ago) and the anguish she had being new to the country, she didn’t have anywhere to reach out for help.”
Blair said her mother continued to struggle, and her inability to integrate, learn the language and communicate with those around her led to depression and isolation.
“That isolation ultimately destroyed her, as she succumbed to alcoholism,” she said.
Blair said she wanted to create an informal setting where people can break away from isolation and speak freely.

“Some people are shy because they’re afraid of being judged or saying the wrong word and what we try to do is provide a safe environment,” said Blair, adding many English language programs are offered in the city, but hers, in particular, focuses on improving conversational English.
For more information, visit grace-centre.ca/english-cafe.