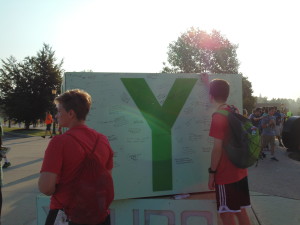 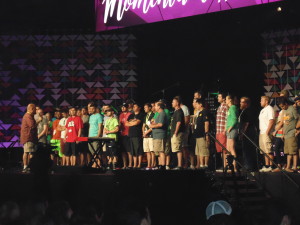 What’s the purpose of my life? That was the driving question for students this morning as they gathered again in Doden Field House on Cedarville campus. A question surrounding the prayer cube outside the student center, around nightly youth group huddles, and during the various Power Trax meetings thus far at Momentum 2016. Randy Smith, who’s worked with Momentum for 14 years, carried on the theme of YOURS with his sermon I HAVE PURPOSE. (Randy is pastor of Grace Church, a Grace Brethren church in Sebring, Fla.)

“The ocean’s so big, my boat’s so small,” was Smith’s opening line. He was quick to emphasize to students that, following Momentum 2016, to not forget that God loves them and that He has a place for us all. Referring to 1 Peter 2:9, Smith showed the purpose in being a royal priesthood and a holy nation, is to also be God’s possession. Smith called himself a father, a grandfather, a husband, but he said that his most important title is slave of Jesus Christ. And slaves have but one purpose, from morning till evening, in their lives; to do what the master wants!

Many reactions to this would be a childish ‘I don’t want to!’, and stamping your foot. He said that we prefer to demand that God serve us rather then we serve Him. Smith reminded students how he was talking about the most loving, caring, personal, and discerning master ever to be known! Saying that ‘we are His’ is also us saying ‘I am not mine,’ putting our hopes, dreams, desires, and ambitions subject to the master’s calling. Jesus’ calling. 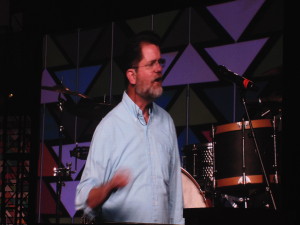 Smith used the outline of the book of Romans to show how the world was slaving to sin. Until God broke that hold through Christ, opening the calling for us to serve Him instead. Also, because of God’s mercy, He wants us to be ready to present ourselves ‘holy and blameless’ before His throne. He wants more then empty commitments and emotional promises. Why go to Heaven to be with God 24/7, when you ignore Him on earth?

“You are not a mistake,” Smith convicted his audience this morning. “You are born of the generation that God made you for.”

Not every day is going to be a dramatic transformation. Rather, every day we need to be open to the opportunities of God because without His daily presence, we won’t discover the full potential of our purpose in Him. ONE person, acting in obedience to Jesus’ name, makes a difference!