Momentum Concludes With a Day of Ministry

On Saturday, the last day of Momentum Youth Conference, founder and president of Crossroads Worldwide Clayton King lead the morning’s session with a message about Lazarus’ sister Mary, who gave up her reputation and her dowry by pouring perfume on his feet to represent his worthiness. 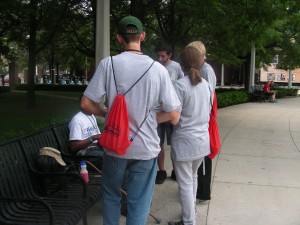 Momentum students stop to have a conversation with a stranger.

“When you decide that you are going to give it all, there will be people in your life who do not understand your commitment,” he said. “Give it anyway. Jesus is worth the sacrifice.”

He then commissioned the room full of middle and high school students to a day full of God’s work, sending them out into the city of Chicago to tell people about the love of Jesus.

Traveling by bus, van, subway and train into the city, the students then joined festivals, visited hospitals, helped people move, performed card tricks for an audience, played in fountains with children, talked to hopeless men and women, and spread the love of God through the city of Chicago.

After the students returned to the Wheaton campus, they gathered for one last session in Edman Chapel. Dozens of students shared their stories from the day’s events, read scripture, performed songs, and prayed. 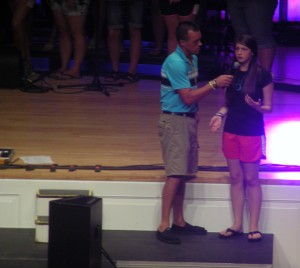 Students share thier stories after a day in Chicago.

Jeff Bogue, pastor of Grace Church in Akron, Ohio,  gave a final word, reinforcing the theme of the Momentum week by calling out students to be a follower, not a fan using the example of David and Saul in 1 Samuel 9. He admonished students to be careful not to become like Saul, who was anointed as a leader and then drifted away from his relationship with God. 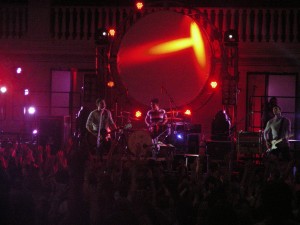 The final night of worship featuring the Jordan Howerton Band.

“Saul’s relationship with God started to become something he remembered, not experienced,” he said. “He forgot who he was and the promises God had made him.”  The story of David and Goliath should have ended with a battle between Saul and Goliath, he explained, but Saul had become a fan instead of a follower.

He encouraged students to keep the faith once they returned home and settled into their routines, reminding them that “Fans don’t fight – they watch…and when God wants something done, he’ll always raise up a follower instead.”