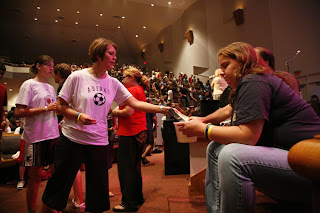 Momentum students and staff opened their hearts and their wallets Wednesday night as Jim Brown, pastor of Grace Community Church, a Grace Brethren church in Goshen, Ind. challenged them to give sacrificially to feed 100,000 people. Within half an hour, more than $70,000 had been raised — more than the original goal of the $15,000 slated to provide food for needy people.

(Tabulations made during the service originally estimated the giving at more than $90,000, but an official count of the funds revealed giving that evening at more than $70,000. The noise during the session with music playing and 1,500 individuals reporting to multiple people what they gave created the discrepency.)

The additional funds will be used to build an orphanage in Southeast Asia and provide clothing, food, and an education for those children for two years. The orphanage will be named for the conference — Momentum.

Earlier in the evening, Brown shared from his recent experience in traveling to Cambodia, where his congregation has sponsored an orphanage.

“We must do something for the poor and needy in this world,” he said. He shared a variety of verses that called for believers to defend the poor and to do it in the name of Jesus.

Brown is the current moderator of the Fellowship of Grace Brethren Churches.