At each location, youth groups were encouraged to find an outreach or service project to do in their own communities on the last day of the conference. In Goshen, the students from Grace Community Church, led by youth pastors Jordan Gillette and Charlie Miller, blessed their own church with cleaning and resetting rooms after Momentum in preparation for the National Conference, Access2021, which was hosted at Grace at the end of July.

One small group of students served a neighbor, Jack, by moving a brush pile and pulling weeds. The church sits on land that was formerly Jack’s grandfather’s farm, and he grew up harvesting corn there. Jack was not thrilled about the construction of the church, and the subsequent activities there caused a tumultuous relationship between him and the church. When Max Beck came on staff in 2021 as the facilities and grounds coordinator, he made a point of showing kindness and love to Jack.

“I have nurtured a friendship with Jack,” Max said. “I made that my mission, to be a personal friend to Jack and his wife, Nadine.”

When Jack had health issues several years ago, Max brought a team of adults and kids over to serve him. Jack, who previously owned a landscaping company, loved having an immaculate yard but struggled physically to keep up with it. The group pulled weeds, mowed the lawn, and cleaned up the area. This act of kindness softened Jack toward the church and enabled Max and Jack to forge a friendship over the past few years. As a result, Lead Pastor Jim Brown met with Jack, shared the Gospel with him, and lead him to Christ in the fall of 2020. 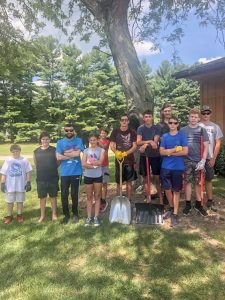 As the Momentum teens were wrapping up their work at Jack’s house, one high school student, Dirk, found out that Jack wished he had mulch. Dirk told Jack if he got mulch, he would bring back a team to spread it. This past week, Dirk and his family gathered other families and went to Jack’s to spread a dump truck’s worth of mulch around his property. Max said, “That was all Dirk. It came out of his love for Jesus and his love for helping people.”

See photos from all four Momentum on the Road conferences here.