Moore to take on women’s tennis, strength coaching at Grace 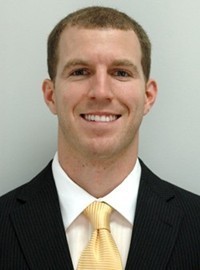 Scott Moore is far from a new face to the athletic department at Grace College, Winona Lake, Ind. Starting this fall, however, he will be adding several new responsibilities to his title.

Moore, starting his second year assisting the men’s basketball team, will become the next women’s tennis head coach and the school’s first strength and conditioning coach.

Additionally, he will oversee scheduling of practices and events at the Gordon Recreation Center.

“I am so blessed to have this new opportunity at Grace College. I never would have thought that my decision to attend Grace as a student nearly 10 years ago would have the impact that it has had on me and my family,” Moore said. “I cannot wait to get started, and I look forward to my new roles and responsibilities as a Lancer!”

The Grace women’s tennis team that Moore will coach boasts a young, talented roster. The Lady Lancers finished 3-8 and 2-6 in the Crossroads League in 2012.

“We look forward to the impact Scott [Moore] will have on all 15 of our varsity programs by serving as our new strength and conditioning coach. We are also excited to have Scott lead our women’s tennis program,” said Grace Director of Athletics Chad Briscoe. “Scott is committed to the mission of Grace College. His unique background and his passion for Christian excellence will serve him well as he impacts the student-athletes at Grace.”

As Grace’s first strength and conditioning coach, Moore will be responsible for working hand in hand with each of Grace’s 15 athletic teams.

“Our goal for the Grace Strength and Conditioning Program will be based around two main purposes: injury prevention and improving performance while glorifying God,” Moore said. “By incorporating knowledge about sport-specific training, our athletes can perform at their highest level using the gifts that God has given them.”

“Scott [Moore] is a terrific addition to our athletic department,” said Grace Vice President for Academic and Student Services Jim Swanson. “He will be a great resource for our student-athletes and coaches with his training in strength and conditioning.”

Moore played from 2004-08 on the Lancers’ basketball squad, ending his career No. 6 all-time in career assists. During his senior season, Moore’s Lancers finished 26-10 and made a run to the Elite Eight round of the NAIA National Championships.

His first year as an assistant coach for the Lancers in 2012-13 was a successful one. The Lancers advanced to the 2013 NAIA national semifinals – the second-longest run in the tournament in program history.