Linda Bowdler, who with her husband, Bill, attends the Winona Lake, Ind., Grace Brethren Church (Bruce Barlow, lead pastor), shared a deeply personal story on Wednesday as she spoke at a benefit luncheon for a local women’s shelter. Bowdler witnessed her daughter, Lisa Mora, die at the hands of her husband, Omar. Bowdler’s story was shared at the online news site, InkFreeNews. A portion of the story appears below. Click here to read the complete article. 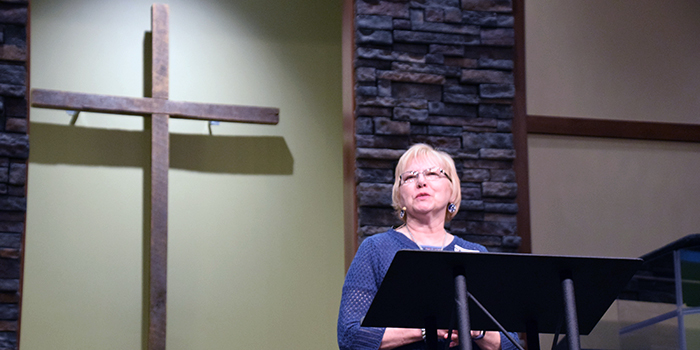 Linda Bowder presented her story of healing at the Beaman Home’s Angels of Hope luncheon.

Almost eleven years after the murder of her daughter, Linda Bowdler presented her story of healing at the Beaman Home’s Angels of Hope luncheon held yesterday, April 18.

Lisa Mora was murdered on May 23, 2007, by her husband as her two children and mother watched. The husband, Omar Mora also killed Harpal Singh at a local gas station before disappearing. Omar Mora has never been located but is believed to be in Mexico.

For the last ten years, Bowdler has raised Lisa’s two sons Jovan and Adrian as they adjusted to living without their mother or father. Adrian started the event by performing a solo on his flute in dedication of his mother’s memory.

Bowdler described her daughter as an amazing piano player and lover of animals. Lisa was a Warsaw High School graduate and went on to earn a degree in social work from Goshen College. It was while at Goshen College that Lisa first met Omar. For several years they were married, bought a house and raised their children until shortly before the murder things started to change.

“She confided in my sister, her aunt, that she was struggling with her husband’s unfaithfulness and abusiveness,” shared Bowdler.

Omar quickly became visibly obsessive and possessive of Lisa as he would wait outside her workplace at night, wouldn’t let her be alone with family members and even abused her in front of the children. Despite counseling and efforts to save the marriage, Omar tragically took Lisa’s life.

Bowdler vividly remembers that night and shared how she was at the house to pick up one of her grandsons for bible study. Upon arrival, Lisa told her mother that Omar had shown up in a frenzy, broken all the cellphones and taken all the car keys. Bowdler and Lisa started to quickly gather the boys so they could all leave.

Click here to read the complete article at InkFreeNews.

The event was also covered by the Warsaw, Ind., Times-Union. A portion of that story appears below. Linda Bowdler speaks Wednesday during The Beaman Home Angels of Hope Luncheon about the May 2007 murder of her daughter, Lisa Bowdler, by Lisa’s husband, Omar Mora. Photo by David Slone.

On Wednesday, the 12-year-old played a flute solo of “Villanella” in memory of his mom at The Beaman Home’s annual Angels of Hope Luncheon. His grandmother, Linda Bowdler, then took the stage to recount her daughter’s tragedy.

In introducing Linda, Beaman Home Executive Director Tracie Hodson said, “In May 2007, she and her two grandsons watched her daughter, Lisa, be murdered at the hands of Lisa’s husband and the father of her two boys. For the last 10 years, Mrs. Bowdler and her family have struggled with the reality of living without their beloved daughter and knowing that the murderer has never been found.”