Mother of Grace’s Dr. Jim Swanson With the Lord 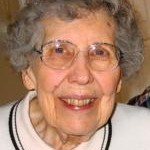 Linnea worked for the Army during World War II in Germany, and she was a homemaker. She was a member of Faith Covenant Church, Farmington Hills, Michigan, and attended Winona Lake  Grace Brethren Church and Grace Village Chapel at Grace Village Retirement Community, both of Winona Lake, Indiana. She was a resident of Kosciusko County, Indiana, since 2005 moving here from Michigan.

Memorial donations in Mrs. Swanson’s name can be sent to Grace Village Retirement Community, 337 Grace Village Drive, Winona Lake, Indiana 46590 and would be appreciated by her family.