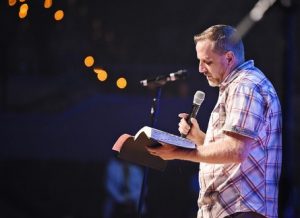 Jeff Bogue has been a frequent speaker at Momentum Youth Conference.

Last year, Momentum Ministry Partners (formerly CE National) named Jeff Bogue as president following the retirement of their long-time executive, Ed Lewis. Jeff is the senior pastor of Grace Church of Greater Akron in Northeast Ohio and has volunteered with the organization for years.

“We are basically all doing the same thing and God just put me in the middle of it,” Jeff said. He plans to focus the ministries in the direction of leadership development.

Momentum Ministry Partners is a national ministry of the Charis Fellowship. It includes several programs that come alongside the local church to offer training and experiences: Momentum EDU (formerly The National Institute), Momentum Urban Centers (formerly Urban Hope), Momentum Travel Teams (formerly Operation Barnabas), and Momentum Youth Conference. Coinciding with Jeff becoming president is the rebrand of these ministries and a refocus of their shared mission.

He says his most memorable message was from 2017 when he challenged students to consider a life in fulltime Christian service. He did not sugarcoat what was ahead for those who answered the call, noting that a lot of ministry went without acknowledgment or gratitude.

“Nobody is going to clap for you,” he told the students. He requested there be no background music and that the lights in the auditorium be left on. He didn’t want the call playing into the teens’ emotions, heightened by song lyrics and mood lighting, but rather he asked them to make an honest declaration, no matter who was watching.

“The responses came pouring forward,” he remembered. That night in the auditorium of Indiana Wesleyan University, hundreds of students pledged their futures to following Christ into fulltime vocational ministry.

God used that night as a catalyst for Jeff’s willingness to step into the lead role at Momentum Ministry Partners. He has always been passionate about leadership development, and when the board approached him about the position, he knew he would want to take the ministry strongly in that direction.

“Ed Lewis and TK (Timothy Kurtaneck, former Operation Barnabas director) laid an incredibly powerful foundation for ministry and passion for Christ. We are building off of that,” Jeff said.

“I am thankful that Jeff Bogue agreed to lead the organization I love,” Ed added. “Jeff has been a great friend for almost 30 years. He loves the Lord deeply, which is key. He is not only a visionary; he also wants to raise up young adults to go into ministry. While he will change many things, I know he will keep Jesus at the center of it all!”

Jeff accepted Christ as his personal Savior when he was a junior at Grace College. He remembers being in the middle of a field during the summer, while wrestling with the hypocrisy of his life.

“Later, I was in Beta dorm doing devotions when I felt the Lord speak to me,” he recalled. He responded that he would go wherever God wanted him to go, even though he wasn’t studying for ministry and had no plans to become a pastor.

After college he connected with Bob Combs, then pastor at Grace Church in Norton, Ohio, who hired him as the church’s youth pastor. During this time, Ed Lewis also took Jeff under his wing and mentored him. Jeff participated in a program called Youth Net where he traveled to different youth ministries around the country to learn their best practices. Ed encouraged Jeff to go through a four-year training called Sonlife that he says gave him a strong ministry philosophy and structure.

After seven years as youth pastor, Jeff was asked to re-start the failing Grace Brethren Church on Ghent Road in nearby Akron (now the Bath Campus). The Norton church sent 100 people with him, as the churches merged administratively, but retained their separate campuses. When Bob retired several years later, Jeff became the senior pastor and has been in that role for 15 years. He has a long-term vision for 30 new churches within 30 years. Currently, Grace Church has six campuses in Ohio, two in Georgia, and one in South Carolina. In addition to preaching at the Bath campus, Jeff’s main responsibilities are overseeing all nine campuses and their ministry development. 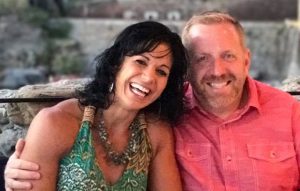 Heidi Bogue, left, has been Jeff’s ministry partner for more than 27 years.

Ministering alongside Jeff is his wife of 27½ years, Heidi. She grew up in Brazil as the daughter of missionaries Norm and Cleo Johnson.

“Heidi brings all the fun into our lives,” Jeff said, “and without her I would be so boring.” 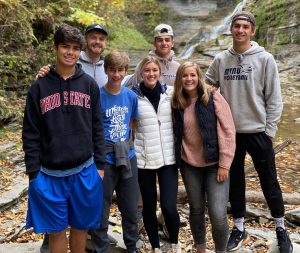 As president of Momentum Ministry Partners, Jeff is setting vision, direction, and a refined ministry philosophy with a goal of leadership development. He plans to emphasize the partnership with Grace College and Grace Church. He wants Momentum Ministry Partners to be the “third leg of the stool” where students are “discipled, connected with, steered toward fulltime ministry, and ultimately trained and released into their calling.” One way he has done this is by moving the main offices to Akron, where there are several Grace Church campuses and a branch of Grace College.

Eric Miller, director of ministry operations at Momentum Ministry Partners, is a testament to the impact of the ministry on the next generation.

“I am a product of everything CE National has ever done,” he said. Growing up, Eric’s faith was solidified and deepened through youth conference, travel teams, and the training center. When he served as a youth pastor in Maryland, he took advantage of every training and mission opportunity offered through the organization.

“I want to see my story become the norm within our Fellowship again,” he added. “I know that’s Jeff’s heartbeat and desire as well; that students would come through our ministry programs and truly meet Jesus, fall in love with Him, serve His church, and point lost people to Him in whatever their local church and community context might be.”

What makes Momentum Youth Conference unique is the way it prepares students and creates a pathway for them to follow that calling.

“We are one of the only places around that still does that,” Jeff said. “We still value someone doing vocational ministry or giving their life to ministry in that way. And that is a big legacy from Ed Lewis.” That night in 2017 is something the Momentum staff discusses regularly. “Seeing those students come for- ward,” Eric said, “It was like God saying, ‘Back up is coming!’”

Jeff has cast a vision for the organization to raise up 2,500 full- time workers in the next 25 years. His heart for the local church and his passion for leadership development will steer Momentum Ministry Partners into a new era of ministry. – by Randi Walle

Randi Walle is the coordinator of the GraceConnect eNews. She lives in Columbus, Ohio.