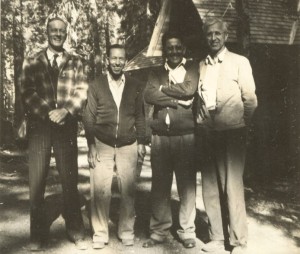 Founders of Camp Clear Lake. Pastor Earl Reed, who was instrumental in obtaining the rights for the land on which the camp sits, is on the right.

Nestled in the Wenatchee National Forest of Washington is a piece of precious history to the Grace Brethren Fellowship. This week marks the 75th anniversary of Clear Lake Grace Brethren Camp, which has been a haven for hundreds of Grace Brethren young people and families since its opening in 1941.

“In the summer of 1941 much of the world was at war,” writes Collin Curfman, editor of Clear Lake Grace Brethren Camp 1941-2016, and associate pastor of Sunnyside Grace Brethren Church (Nathan Zakahi, pastor).  “A bottle of Coca Cola cost five cents; gas was eleven cents a gallon, and the minimum wage was thirty cents an hour. Marvel Comics would introduce a new superhero that year named ‘Captain America’ while Time Magazine would select Winston Churchill as their man of the year.

“In the remote Cascade Mountains, somewhat removed from the mounting pressures of the day, the sound of handsaws and hammers could be heard. A group of local pioneers was engaged in the work of framing what would soon be the first building at Camp Clear Lake – the Dining Hall.”

Seventy-five years later, the dining hall at Camp Clear Lake has not only been the meeting place for dozens of youth camps, family reunions, church family camps and Bible conferences, and the annual Northwest Focus Retreat. It is also an official piece of history, designated as a historical building in the Wenatchee National Forest and must be maintained as such instead of being expanded or altered.

Curfman writes, “The Northwest District in 1941 consisted of three congregations; Sunnyside, Spokane, and Harrah. The camp was established by Earl Reed, who was at that time pastor of the Sunnyside Grace Brethren Church. He had organized district youth camps at different campgrounds in the Northwest starting in 1937. When he heard that Clear Lake was being opened up for summer camps, he applied for a site and was granted a permit in November of 1940.

“Pastor Reed also felt that… the camp should not be for the Sunnyside church alone but the entire Northwest District. Thus, the Northwest Brethren Camp Association was formed.” 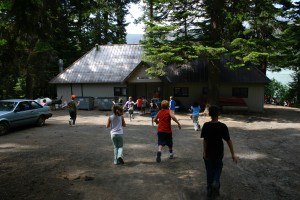 Camp Clear Lake continues to be a treasured spot in the Northwest District of Grace Brethren Churches.

Those were the first steps of the 75-year process of developing the camp into what it is today, housing boys and girls cabins, a paved road around the lake, a chapel, and cooks and nurses cabins. In 1988, a 7,000 square foot, a two-story lodge was erected, and more cabins were added in the early 2000s. Each of the buildings built at Clear Lake Grace Brethren Camp during its long history was built by the people of the Pacific Northwest Fellowship of Grace Brethren churches.

After 75 years of memories, this piece of historic land is still up and running near Naches, Wash., providing “a mountain setting where Christians introduce non-believers to the Lord,” according to their Facebook page. And there are more memories to be made. It offers summer as well as winter camps, rentals, and retreats, offering its pristine mountain views and peaceful lake waters to members of the Brethren Fellowship for many more years to come.

The annual conference for the Pacific Northwest District of Grace Brethren Churches was held last weekend at Camp Clear Lake  to celebrate the anniversary of the camp. Pastor Larry Smithwick, a nephew of Robert D. Culver, former Harrah pastor, was the keynote speaker for the event. Click here to find the 75th-anniversary book on Amazon and CreateSpace. All of the proceeds from the sale of the book will be donated to the camp.