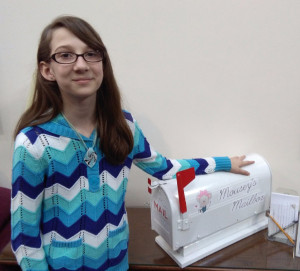 For almost two years, some members of the Grace Brethren Church (WLGBC) in Winona Lake, Ind. (Bruce Barlow, lead pastor), have received a special homemade encouragement card, printed with a Bible verse and written with words of encouragement. It’s a simple gift, but to a discouraged family, a few words go a long way.

The person behind the cards? Thirteen-year-old Avigael (Avi) Utley, second oldest of five children, whose family has attended WLGBC for four and a half years. “I am really small and have my daddy’s ears,” Avi explains. “Mousey’s Mailbox was named in honor of my Dad who has called me ‘Mousey’ since I was little.”

“A good friend of mine really encouraged me to start my ministry,” Avi notes. “Last year, a few friends and I were asked to make Christmas cards for the Care Team to pass out as they went caroling at Grace Village. I remember writing Philippians 4:4 on the front of one card.  A week or two later, a man at church came up to me and said his name was Mr. Jim Dougan and he had received that card I had made. He told me when he had received my card, he had just had hip replacement and was in a lot of pain. He was having a hard time trusting God. Then he received a homemade card, with the words,’ Rejoice in the Lord always; I will say it again, Rejoice!’ written on the front. He said it helped him realize that no matter what happens, we can still rejoice in the One who made us and has a purpose for each of our lives.”

Shortly after, Avi and her mom put their heads together and came up with Mousey’s Mailbox, and Avi and Mr. Dougan have since become good friends. When Avi approached Pastor Barlow with the idea, he was immediately on board.  He presented the idea to the Care Team at the church, which showed support for the youth being more involved in ministry. Avigael shared the idea with the church family one Sunday morning. Once the card ministry was added to the weekly church bulletin and card requests were placed next to the mailbox in the church courtyard, she got to work.

When she receives a card request in the mailbox, Avi takes it home and writes a prayer based on each recipient’s situation. She then designs and decorates a handmade card, writes the prayer on the inside and selects a special Bible verse for the outside. Prior to mailing the cards off, Avigael prays that the person receiving it would feel God’s presence in their lives.

“I’ve had several difficult requests,”  Avi notes. “People going through the loss of a loved one or scared about a surgery. I have gotten a lot of thank-you notes from people who have received a card. Some said that it was the most encouraging words they had received during their trials.”

Avi has collaborated with the Care Team at WLGBC for projects such as making personalized cards for singles and widows during holidays when things may be exceptionally more difficult.

“Those first few months were hard; I was overwhelmed with cards to make. I could never have made it through if it weren’t for my friends,” Avi says. “Every third Thursday of the month, we would meet at the church to decorate cards. They all helped so much.”

Through the process of ministering to others through cards, Avi has come to understand the power of words in a new way.

“Words can comfort someone through their trials. They can uplift and bring hope to the hopeless, drawing them closer to their Creator. “

[Connect:]
Click here to send a note of encouragement to Avigael.