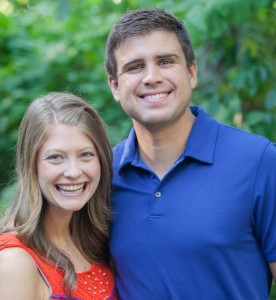 Morgan and Joel Trainer are joining Movement Church in Hilliard, Ohio for one year as church planting residents.

Movement Church, Hilliard, Ohio (Mark Artrip, pastor), is moving forward with its plans for a new church plant in the greater Columbus area. Still a young congregation itself, Movement Church is looking to keep the momentum going by growing church after church—in buildings and in souls—throughout the communities of Ohio.

With that in mind, Joel and Morgan Trainer will join the church for one-year as Church Planting Residents.

For the past three years, the couple has worked with Kanakuk Kamps, a large Christian sports camp in Branson, Mo. However, they are not strangers to Ohio or to Movement Church. Morgan and Joel met in Beulah Beach Camp in Vermillion after Joel graduated from Indiana Wesleyan University, where Morgan was still a student. They dated, and later married, with a common question driving them: What is going to be our mission? What are we doing with our lives?

Joel and Morgan found they each had the same answer—to make disciples.

Joel grew up with missionary parents in the jungles of Gabon, Africa, and traveled to Brazil with his college soccer team to share the gospel. While there, he witnessed 30 Brazilians instantly giving their hearts to the Lord, and it’s where he felt God speaking toward his own heart.

Morgan, likewise, has felt the fire of leading people to Jesus. A native of Columbus Ohio, she grew up in Grace Polaris Church, a Grace Brethren congregation on the north side (Mike Yoder, lead pastor), and she describes their time in the Ozark Mountains as a ‘wild adventure.’

The Trainers moved to Missouri in the late summer of 2013, joining a staff of 2,000 to help mentor and disciple the 20,000 kids who annually come through the camp.

“I love teaching the Bible,” Joel expresses. “And I love leading people towards Jesus because I know how much He has changed my life!”

The desire for church planting didn’t fully hit Joel until 2014. Morgan, on the other hand, has always had an interest. The opportunity to work with Mark and his wife, Kristin, with whom they have been long-time friends, made the connection seem obvious.

“The vision of this residency is to provide experience in church planting, portable church, local church ministry, teaching, administration, leading teams, casting vision, and fund-raising,” says Mark, who planted Movement Church in partnership withEncounter Church, Dublin, Ohio (Sean Spoelstra, pastor), in 2012. “These are some of the many things that pastor/church planter will need to be efficient in. No program can perfectly equip and prepare an individual for planting a church but our desire is to impart to them everything we have and know.”

This residency includes maintaining weekly office hours and a role on the Movement Church staff. Joel and Morgan will be given platform responsibilities, will lead a small group. They will have time to study demographics, assemble a ministry plan, and develop a timetable for a church plant. In addition, Joel will pursue licensure in the Fellowship of Grace Brethren Churches, and be sharpened through coaching and attending relevant gatherings and conferences.

“The goal of this residency is that we [in partnership with Encounter Church] will be able to confidently commission The Trainers and a launch team (with members from our congregations) on a three-year plan to plant a church in the greater Columbus area,” Mark adds. It is a similar timetable to the one that was followed by Encounter from 2008-2011 and by Movement from 2012-2015. “We have seen it work to stair step a church toward being self-leading and self-supporting,” Mark said.

“People have asked us if we’re nervous to take this leap of faith,” Joel says for both Morgan and himself. “There are certainly are moments of uncertainty, but ultimately, we are so at peace with God’s calling in our lives. We feel confident because God always provides for what God plans.”

As they prepare to move, they are also excited about the arrival of their first child. A daughter, to be named Cooper Meyers Trainer, is expected in June of 2016. – by Haley Bradfield

Click here to read more of their story.  Send the Trainers a letter of encouragement at joeltrainer9@gmail.com.