The May newsletter from the Eagle Commission, the spiritual support ministry of Charis Fellowship military chaplains and their families, has been released by Mark Penfold, Chaplaincy Endorser, Charis Fellowship (FGBC), Chaplain (Colonel), U.S. Army, Ret. A portion of it appears below. Click 2018.5 ECNews to read the complete newsletter. 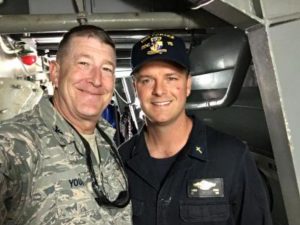 Air Force Chaplain George Youstra (left in the photo at right) accompanied the vice chairman of the Joint staff and USO guests on a global tour (literally.) From Alaska to Korea and Japan, the Middle East and Europe, he had the opportunity to encourage military chaplains and visit firsthand our nation’s servicemen where they are serving overseas. 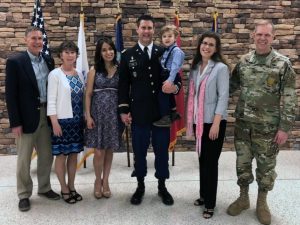 Army Chaplain Pete Stone was promoted to Major on April 13, 2018 (not the date on his orders!). Along with the Schaefer’s and Graham’s, Robin and I had the privilege of being at his promotion at Fort Belvoir. Pray for Pete, Monica, and Seb (short for John Sebastian) … as they serve there but also expect their second child … a girl in late July (which is why Pete will NOT be at Access2018.)

For your prayer … the following chaplains and their families have already moved to the next assignment or will be doing so in the next few weeks:

While regular and frequent moves every 2-3 years are a part of military life, that does not mean they become less stressful. To pack up and move, to leave the memories and ministry friendships made, and to start anew is a huge challenge — for our chaplains, their spouses, and their children.

Also, due to the summer moves (during any given summer, about 20-25% of all military personnel are reassigned), Chaplains David Mvondo (Vilseck, Germany) and Carl Phillips (Wiesbaden, Germany) ask for your prayers. As senior leaders in their units, they are NOT moving but, with others moving, it does mean that they will be carrying a heavier workload for the summer months.