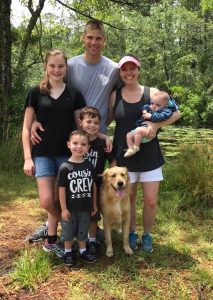 God really does answer prayer!  Thanks to each of you who prayed for Drew and the surgery last week to remove a tumor on his brain.  The Lord guided Jim, Ashley, Drew and the entire medical team in ways that can only be described as “amazing” and “miraculous.”  The surgery was very successful as they were able to excise the entire tumor.  The pathology reports indicated that it was benign.  Drew has all his motor skills and other functions.

On Monday, June 23, Jim and Ashley posted the following:

“Not even 72 hours after brain surgery this boy is discharged! We are staying in Memphis to be seen at the outpatient clinic on Tuesday and will most likely drive home on Wednesday! We prayed today in thanksgiving for Drew’s medical care, gave cards to some of his nurses, and he even wanted to pray for the other kids who are sick having seizures.”

“Let your roots grow down into him and draw up nourishment from him, so you will grow in faith, strong and vigorous in the truth you were taught. Let your lives overflow with thanksgiving for all he has done. Colossians 2:7

As of the posting of this update, Drew and his parents have returned home.