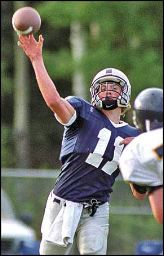 Carmen Franchino, of the Peninsula Grace Brethren Church in Soldotna, Alaska, has called to our attention the following article on an outstanding young Christian athlete from the Peninsula church. The article appeared in the Clarion newspaper on Tuesday (Clarion photo).

Faith and singing have always come before football for Soldotna senior Aleks Pfaffe. Pfaffe’s father, Greg, said Aleks was timid when he was a little kid.

“He’s always been a singer, so he was asked to sing in church when he was young,” Greg said. “He overcame that fear and timidity really early.

“It gave him the opportunity to perform in music and helped his confidence.”

In turn, Greg said the opportunities Aleks had to perform music shaped the type of athlete he would become in high school.

“In music, you just have to play your part,” Greg said. “Whether it’s band, or singing a part in the choir, you have to know how to be a part of a group and work together.”

That explains why Pfaffe is the quarterback of the Soldotna football team this year. After being the junior varsity quarterback as a freshman and sophomore, Pfaffe was moved to wide receiver as a junior.

Pfaffe said, thanks to games he had always played with friends, going up and grabbing a ball in a crowd came naturally to him. In 2004, he was the top receiver on the peninsula, with 22 catches for 320 yards and four touchdowns in the regular season. Pfaffe was named second-team all-small-schools state for his efforts.

Despite his receiving success, with quarterback Cameron Schneider graduating, Pfaffe offered to switch back to quarterback for the Stars.

“I felt it was the position I needed to play for the team,” Pfaffe said. “I like both positions, but the team is most important.”

Soldotna head football coach Sarge Truesdell said that it was telling that Pfaffe came to him last winter and offered to make the position change.

“When he came to us in the off-season and said he wanted to be the quarterback, that told us we had a leader,” Truesdell said.

Pfaffe has been exactly that for the Stars. Friday, Soldotna needed a win against Skyview to keep its playoff hopes alive. Pfaffe rushed for 144 yards and two touchdowns. He also forced a key fumble in the fourth quarter that helped the Stars to a 35-14 victory.

“He is our leader, without question,” Soldotna offensive coordinator Galen Brantley said. “We’re going to go as far as Aleks takes us.”

Brantley is heavily involved in Soldotna’s off-season program and said Pfaffe has always attended every camp and weight training session asked of him.

“We were at a camp as a sophomore, and I went in at six o’clock to wake the team up,” Brantley said. “Aleks was in there reading scripture with a flashlight.
“He’s definitely a kid with really high moral values and great character.”

Truesdell said Pfaffe is always one of the first to pick up game film and that he does things like sweeping the locker room and making sure all the helmets are hanging correctly.

“He does a lot of things for this team that, probably, 90 percent of the kids on the team don’t even know about,” Truesdell said.

Pfaffe also participates in basketball and track at Soldotna.

“I started track as a sophomore to get in shape for football and work on my athleticism, speed and agility,” Pfaffe said. “Coach (Mark) Devenney inspired me to like the sport of track itself.”

As a junior, Pfaffe finished fifth in the 110-meter hurdles at state.

Despite all his successes in athletics, Pfaffe said he knows he will not be able to make a career out of being an athlete.

“I really enjoy sports, but if I’m going to support a family and have a career, I’m going to have to go into teaching high school music and music lessons,” Pfaffe said. Pfaffe plays the French horn in the Soldotna band and also sings in the choir.

Vernel Schneider, the band director at Soldotna, said Pfaffe has qualified for all-state band and choir each year he has been at SoHi.

“Because he has a wonderful singing voice, it has helped him instrumentally,” Schneider said. “French horn players have to be able to hear pitch. Aleks has an extraordinary ear for music.”

Pfaffe also has used his French horn skills to play in the pit orchestra of the 2005 Kenai Performers’ production of “Brigadoon.”

Pfaffe has always been home schooled, and Greg and his wife, Susan, appreciate what the Connections program has been able to do for their son.

“There are so many people in this community who are willing to dedicate themselves to tutoring young kids,” Greg said. “Aleks has been able to take advantage of that, and we appreciate what those people have done for him.”

Pfaffe has not yet decided where he will attend school next year.

“You don’t have kids like Aleks that come on board every year,” Brantley said. “He’s the complete package. He’s a good student, good athlete and a great kid.”