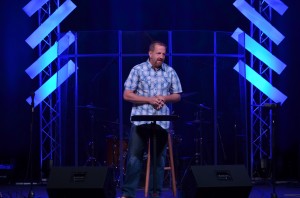 With an unwavering commitment to the Word of God and a desire to impact the world for Christ, the national conference of the Fellowship of Grace Brethren Churches (FGBC), FellowShift, concluded on Monday at the Omni Shoreham Hotel in Washington, D.C.

During the final Celebration on Sunday evening, Jeff Bogue, pastor of Grace Church, Bath Campus, Akron, Ohio, challenged the conference to lay down any prejudices and commit to working together. The evening ended with most in the room signing a large banner as A Declaration of INTERdependence.

“If we’re going to build the kingdom of God as a fellowship of churches, we have to recognize and confess our sins,” he said. He noted activities that included arrogance, bitterness, pride, hoarding of resources, and lack of gratitude, while admitting, “I have committed everyone of them against you.”

He stressed the importance of working together. “I have a dream that once, forever, we take the elephant in the room and kill it,” he said. He encouraged the conference to stop competing and “start completing one another.

“I want to affect the world for Jesus and I don’t want people to go to hell,” he said.

He encouraged churches to share resources, even sermon outlines if necessary. “We must give and we must receive,” he emphasized.

Bartley Sawatsky, executive director of the FGBC (and pastor of Grace Community Church, Mississauga, Ontario), had promised a “buzz-generating” national conference and he delivered. Grace Brethren speakers encouraged, challenged, and taught the conference about shifting attitudes and methods to reach a new generation and a changing world with the unchanging message of the gospel. (Click here to see quotes from some of the speakers.) 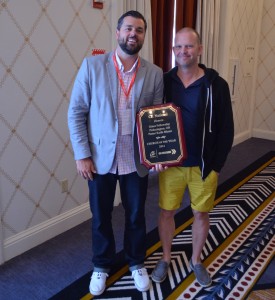 Among the highlights was the all-FGBC luncheon on Sunday where missionaries were commissioned, new congregations celebrated, and a few awards presented.

Women of Grace USA presented Janet Minnix, the outgoing president of the organization, with it’s first-ever Lifetime Achievement Award – a clock shaped like a ship’s wheel symbolic of her successful efforts to “turn the ship (Women of Grace USA) around.”

The Association of Grace Brethren Ministers recognized their award recipients, which had been honored on Friday during the AGBM annual meeting. Jesús Muñoz, director of ethnic ministries for Encompass World Partners, received the Excellence in Ministry award. Jim Brown, pastor of Crossroads Community Church, Holmesburg, and director the MetroGrace church planting effort in Philadelphia, Pa., was recognized as Pastor of the Year. Charles Thornton, longtime Grace Brethren pastor who now resides in Soldotna, Alaska, received the Lifetime Achievement Award. 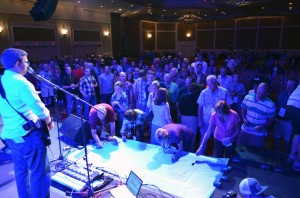 Most of the national organizations sponsored a meal where there were opportunities for updates from that ministry and to conduct necessary business. Encompass World Partners opted to sponsor Engagement Stations, where conference attendees could learn more about ministries around the world and how to engage with mission personnel in those areas. CPR-3, a cooperating ministry, hosted Light Up the Mall – A Night to Remember in front of the U.S. Capitol. Ice cream, water, and light-up gadgets were part of the evening, which included a group photo.

Additional photos from the week may be viewed at the GraceConnect Facebook page.

National conference in 2015 will be held outside New York City with opportunities to go into the city to visit a variety of ministries. Scheduled for July 23-26 and dubbed the Flinch Conference, the event will focus on risk and what God can do when His people step out in faith.