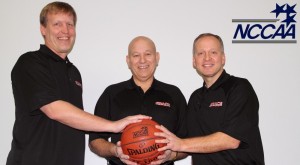 GREENVILLE, S.C. – The National Christian College Athletic Association (NCCAA) has announced a contract extension with Grace College as the host for the Division I Men’s and Women’s Basketball National Championships for 2015-2017. The championships will be held on the Grace College campus in the 2,200-seat Manahan Orthopaedic Capital Center.

“The NCCAA is thrilled and blessed to have Grace College renew their bid and support to host the Division I Basketball Championships,” said NCCAA Executive Director Dan Wood. “With the return of Athletics Director Chad Briscoe, along with the continued support and excellence of the whole athletic staff, we look forward to three more years of outstanding competition and community service impact to the Winona Lake/Warsaw area.”

“This is a great day for our athletic department, campus and community,” Briscoe said. “We are humbled and thankful to be selected by the NCCAA for the opportunity to host both of these national championships. We will work diligently to continue creating a national championship atmosphere that generates great memories for the participants, fans and our community.”

“Grace College is honored and delighted to once again host these great championships,” said Grace College President Dr. Bill Katip. “We have thoroughly enjoyed hosting the NCCAA championships over the last five years, and we are excited at the opportunity to continue holding this prestigious event on our campus.”

“The CSPs truly define the NCCAA and its commitment to our student-athletes,” Wood said.  “Our goal is to remind each participant of his/her Christian responsibility prior to competing for a national championship.  One men’s and one women’s team will leave with a banner as champions, but each team and individual will have the opportunity to carry the banner for Jesus Christ while in Winona Lake and throughout their life.”

The NCCAA, a not-for-profit association headquartered in Greenville, S.C., is America’s only Christian intercollegiate athletic association. It serves over 100 member colleges and universities involving well over 13,000 student-athletes and 850 coaches. A combined total of 25 national championships in men’s and women’s sports are sponsored by the NCCAA. The NCCAA also sponsors mission endeavors throughout the world sharing the witness of Jesus Christ through athletics.

“It is exciting for Grace College to renew and continue hosting the NCCAA men’s and women’s national tournament,” said Grace Vice President for Academic and Student Services Jim Swanson. “This event brings quality college men’s and women’s basketball to the MOCC, our student body and the Winona Lake community.”

Crossroads League Commissioner J.D. Collins added, “I am very pleased for Grace College to be awarded another three-year contract to host the NCCAA National Championships. The MOCC at Grace is one of the best small college facilities in the nation, and the NCCAA National Tournament will continue to be a premier national tournament.”

For more information regarding Grace’s hosting of the NCCAA Division I Men’s and Women’s Basketball Championships, visit www.gclancers.com/nccaa.