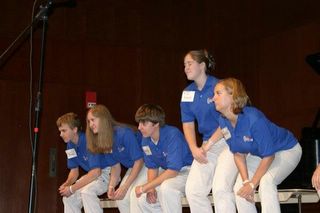 Ray Feather, Quiz Master, conducted the final quiz between the top two teams—North Central Ohio and Chesapeake. Chesapeake leaped into the lead with the first question, and NCO countered with the next question. The first error, by NCO, was not costly as Chesapeake was not able to capitalize.

On the final question, with the win in the balance, Chesapeake won the jump, but gave an incorrect answer. NCO finished the verse correctly for a 30-point bonus to win all the marbles, 200-160. North Central Ohio emerged from the see-saw contest as the national champion quiz team for this year.

Photos and expanded coverage is available at www.bnyc.net.