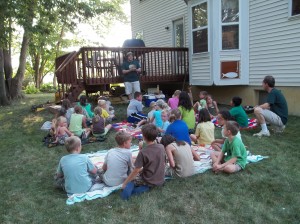 Vacation Bible school at Centerville Grace Church, a Grace Brethren congregation in Centerville, Ohio, has been moved to the backyards of people in the church.

Spring is not even a month old, but the folks at Centerville Grace Church, a Grace Brethren congregation in Centerville, Ohio, are beginning to think about summer and their plans to take the gospel to the children of their community.

“We were doing VBS (vacation Bible school) at the church just one week in the summertime. After doing it a couple years, I realized that we were getting the same people, and it was primarily church people,” Dave Holmes, pastor, explains.

The congregation wanted to reach more people, so they began taking VBS directly to the neighborhoods.

“That has really opened up a whole new set of connection points,” Holmes reports. “We did five or six neighborhood Bible clubs last summer in different neighborhoods around our church.”

They use the same curriculum in each setting, since odds are slight that the children would attend more than one club. The congregation stepped up to meet the need for additional volunteers. “We need probably seven to ten people to run a club. And we got that and more,” Holmes notes.

Their work is paying off.

“I can think of Autumn, who is a woman who had her daughters go to a club,” Holmes recalls. “Through that she became interested in AWANA (children’s program). It went from neighborhood Bible club to AWANA to coming on Sunday morning and really getting on fire for Christ. Her kids have come to know Christ through that.” – by Andrea Skowronski