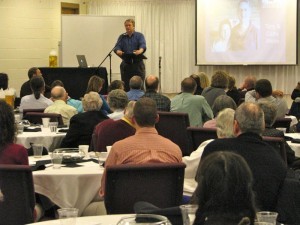 Dr. Tony Webb encouraged the NEO conference from the Scriptures, showing how Paul was a team player in his work. Teamwork is important. (Photo by Ron Boehm)

District Moderator Ron Boehm received the report that 498 individuals had received Christ as Savior last year in district churches, which includes 17 congregations from as far west as Ashland, Ohio to as far east as Milton and Missassauga, Ontario, Canada. (See a complete listing, with founding dates, here.)

Nine individuals were recognized for their work in the district. They included:

For more information and to view photos of the event, see the NEO District Conference web site.