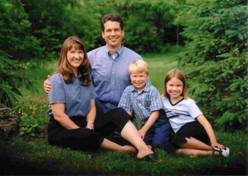 Bill and Bambi Walker and their two children, Elisha and Moriah, have arrived in the Toronto area to join Team Canada as prospective church planters.

Bill Walker, a native of Maine, accepted the Lord through a Billy Graham telecast during a very dark period in his life. Educated at a Bible Institute in New Brunswick and at Washington Bible College and Capitol Seminary in the Washington, DC area, he served as associate pastor of a church in Canada for several years. While at Capitol Seminary he also was director of admissions for the school.

In October of 2000 he became pastor of a struggling small congregation in northern Virginia near Dulles airport, and in the four years of his pastorate there saw the church grow to an average Sunday morning attendance of about 245. His associate pastor and music director in that church was current BMH executive director Terry White.

For a number of years Walker had taken young people to Mississauga to participate in the Great Canadian Adventure and also with the Explorers group. Feeling an increasing call on his life to evangelism and church planting, he and Bambi went through the recent GBNAM church planter’s assessment program in Chambersburg, PA.

He has now resigned his church in Virginia, they have sold their residence there, and have purchased a home in suburban Toronto and have all their permanent residence status paperwork in place.

Philip Bryant of Team Canada says Walker will work with Grace Community church for about 18 months and then, Lord willing, will plant the next Grace Brethren church in Canada.

Information about the existing two Canadian Grace Brethren churches may be obtained at www.grace-church.ca and at www.reallife.ca. Both Explorers and the Great Canadian Adventure are still open to participants this summer. Information may be obtained at www.canadianexplorers.ca and at www.canadianadventure.org. Registration is open until May 1, and then late fees apply.