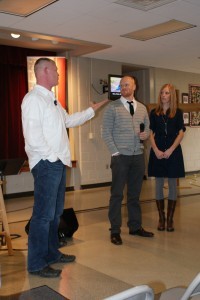 Mark and Kristin Artrip, right, are introduced by Pastor Sean Spoelstra as the couple who will lead the first church plant out of Encounter Church.

Sean Spoelstra, pastor of Encounter Church, a Grace Brethren congregation in Dublin, Ohio, has announced that the church is launching their first church plant.

“For more than three years I’ve said, ‘I don’t know who or where or when, but we are committed to planting a church and are putting five percent of our offerings aside to prepare for it.’  It gives me great joy to tell you that this past Sunday, January 29, Mark and Kristin Artrip were introduced as the couple who will be the first to lead a church plant out of Encounter Church. This will make us a mother church and Grace Church in Powell a grandmother church.”

The announcement came as Encounter celebrated their third anniversary of holding Sunday morning services and Spoelstra was teaching on the church’s core value “Multiply,” which has church planting as a major component.

The couple will move to Hilliard, Ohio, on the northwest side of metropolitan Columbus, to begin a new Grace Brethren work. He is currently the youth pastor at Grace Church in Powell, Ohio.

“Mark is committed to finishing well at Grace Church and plans to come over to Encounter at the end of this summer,” said Spoelstra. “He then will be a leadership resident with us for approximately six months, teaching, training, praying, dreaming, and preparing his ministry team to launch Movement Church in the Spring of 2013.”

Mark Artrip explains more in an open letter to the Powell congregation on his blog. You may also follow Movement Church on Twitter, @movecolumbus.