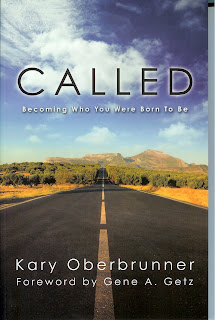 Called: Becoming Who You Were Born to Be, a new BMH Book by Ohio pastor Kary Oberbrunner, reminds believers that living the life of a Christian is more than just accepting Jesus into their hearts, it is also following Him every day. The book was released this week by BMH Books of Winona Lake, Ind.

In his introduction, Oberbrunner says the book, “exposes the lie that says, Accept Jesus into your heart and then go on your merry way and live the rest of your life, calling your own shots. It debunks the myth that life is all about you and what you want.”

In the book’s foreword, Dr. Gene Getz, president of the Center for Church Renewal and professor at Dallas Theological Seminary, says, “In Called, Kary gets to the heart of the life we are called to live…Called will equip and empower you to become who you were born to be, the person Jesus Christ has called you to be.”

Oberbrunner is the founder of Redeem the Day ministries and also the author of The Journey Towards Relevance. He serves as director of Grace Institute and pastor of discipleship and leadership development at the Grace Brethren Church in Powell, Ohio.