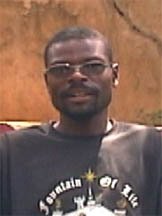 Dr. Francois Ngoumape (pictured), who directs the Bible schools and seminary for the Grace Brethren churches in the Central African Republic, has been asking for prayer for safety during these difficult times in the CAR. Here is a slightly-edited version of his latest report, which indicates that God has been answering those prayers.

Yes Jesus is living. We have just celebrated His resurrection. Since March 23 we were on Easter vacation, with the opportunity for some of our students to travel to visit their parents and their churches.

Those who went toward the west have been caught by bandits who beat them up, but their life was safe. A village toward the west of the country, named Kaita toward Bocaranga, has been fired on by the bandits. The churches of the Brethren were to meet in this village for their district conference. Fortunately, the damage arrived before the date of the conference. More than 150 houses were burned, and a deacon has been killed.

A student went northbound in Markounda to see his parents. He made the trip by bicycle, 600 kilometers. When he arrived he met a few of his relatives. They were astonished to see him, because all said since the war in this part since last September, he is the first person to make this road.

Praise the Lord all of us came back safely to the campus. Since April 3 until April 16 the bandits were within 150 metres of the campus, but God stopped them from doing anything to us. Thanks to your prayers, since April 17 they moved away from us.

It is true that Jesus lives, and that He watches over His beloved. As Psalm 23 says, �even though I walk in the shade of the valley of the death, I don’t fear any pain.� That is what encourages us and motivates us in the ministry for His glory.

I thank you very sincerely for your unceasing prayers and your letters of encouragement to us in the ministry here at Bata. Please pray that one day we will be able to have a fence around the campus for safety. May God’s grace and peace dwell with you!