Nothing But the Bible 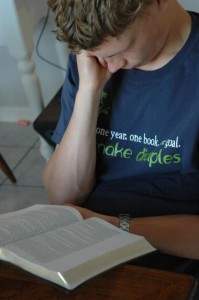 Each student at the Great Commission Bible Institute brings a wide-margin, no-notes Bible to class. That is their only textbook.

“We’re in a war of information here,” said Dr. Randy Smith, director of the Great Commission Bible Institute (GCBI), a ministry of Grace Church, a Grace Brethren congregation in Sebring, Fla., and the armory is the Internet. The World Wide Web is only 25 years old. He says that in that quarter of a century, however, it has gained 2.9 billion users—40 percent of the world’s population. In America, 81 percent of the public—numbering an estimated 256,770,00 people—logs onto the Internet every day.

GCBI is one way—“the most effective way,” according to Smith—to arm oneself with Scripture. Students come from all over the United States to study the Bible for one year under the institute’s broad mission statement, “to produce people of godly character, who are biblically grounded and effective in practical Christian ministry.”

As the information age emerged, and the Internet grew in strength and scope, so too did the breadth of anti-Christian argument. “There are more than 3,000 websites that will tell you that God isn’t real,” said Smith. Armed with a smart phone, a high school student can pull up “everything that’s been accumulated in a compendium of what’s wrong with [Christianity] at their fingertips on their phone.”  That Google search would take less than three seconds.

“In the middle of the information age,” said Smith, “the church hasn’t really significantly stepped up the level of information it’s giving. The issue is without a biblical worldview, honestly, we’re getting creamed out there.” He stressed that knowing the Bible—the whole Bible—is imperative in this information-saturated age.

There are no additional textbooks or provisional material at GCBI. Instead, each student brings a wide-margin, no-notes Bible to class. By the end of the year, students have covered every page of their Bibles with hand-written notes taken from class, ministry experience, and an Israel trip.

“I want [students] to be so familiar with that book that [they] understand what each chapter is for—not just what it says, but what it does,” said Smith. “[GCBI students] learn to be able to face life with a Bible in their hand. That kind of confidence is going to transform their ability to stand up in the face of criticism.” — by Marisa Vogel