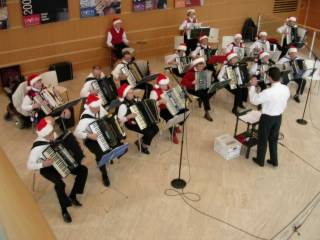 Pastor Steve Makofka of the Centerville, OH, Grace Brethren Church, is shown here directing the Oakwood Accordion Band in the lobby of the Schuster Center for the Performing Arts in Dayton, Ohio. Makofka, whose interest in the accordion and ethnomusicology increased after a mission trip to Africa, joined the band to gain some more facility in playing, and became the director when the need arose. Makofka, who has a B.S. in Music Education from Grace College, says the band will be playing in his church on December 26. “I’ll have the opportunity to bring my music family and my church family together,” he says. He requests prayer “that we will have an effective witness to a mostly unchurched group of musicians.” (Lowell Davis photo)