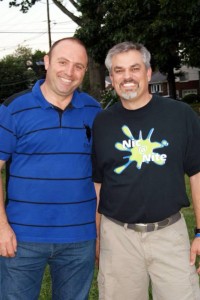 Today’s story comes from Steve Galegor, Jr., a field leader with GO2 Ministries in partnership with BILD International for Albanophone church development. He and his wife, Melanie, have worked in church planting among the ethnic Albanian Diaspora in the New York Metro region and the Northeast since 2000. He will be speaking at this year’s Flinch Conference, which will be held in New York City this July 23-26.

Our Albanian churches here in New York/New Jersey have been working through the book of Acts recently, not as a mere history, but as a catechism for us today as we continue the mission Jesus began now among our first generation of Albanians in the Diaspora here.

Acts is full of risk, in line with the great risk taker, Jesus himself, who went into the teeth of pain and evil for the “joy set before him” on the other side of that risk. Those early believers did no less, and I was struck recently by the risk-taking efforts of Ananias, whose call was to take the risk of trusting God’s wisdom in the selection of Paul as the Apostle to the nations. The reality of risk drips from Ananias’ words to the Lord in Acts 9:13 and following: “Lord, I have heard much about this man, how much evil he has done to your saints at Jerusalem. And here he has authority from the chief priests to bind all who call on your name.” Ananias took risk in one hand and faith in the other and boldly met Paul with the title “Brother” on his lips.  The rest is catechetical history, so to speak.

Let me introduce you to such a guy in the modern day — someone on mission among his countrymen. It was the risk of one that multiplied to an entire family and has led to multiplied churches and believers, only now here in the Albanian Diaspora in the New York region.

Years earlier as Albanians were dispersing anywhere to make a better living, a young lady named Alketa had taken a risk to live in Crete (where deportation back to Albania was a bit more difficult) and scratching out a meager existence as a worker in a small shop. A visiting British missionary couple took an interest and told her about Christ and their prayers for Albania. A visit for coffee ensued, then a repeat visit next year, and again the following. Finally the risk lead to a visit to her family in Albania and the meeting of this meek older couple with Alketa’s rugged, and hardened little brother, Beni, a troublemaker of various sorts. A gracious demeanor and persistent questioning led to an encounter with God and not long after this young man found himself sitting awkwardly in the back of a church service – the very subject of his ridicule in days before. God’s Spirit met the risk of one person, and a whole family turned to God – along with Beni, the last one you would expect, but the one whose zeal and love for the Lord has been born out of a life of wrongheaded living.

Beni (Kristo) will be leading the Riskursion to the Albanian community in Queens during our Saturday together [during Flinch Conference]. There are many like him in that busy part of Queens, making life work as best they can, but ignorant of the new possibilities available through grace by faith in Jesus and by the power of His Spirit. The Beni’s of the world are worth the risk, and you never know the exponential power that a risk like that might have. Pray for the new church emerging in Queens among Albanians there, who will risk everything — like most immigrants — for that which is not truly eternal in nature. May they find Jesus more than worth the risk. — by Steve Galegor

Steve Galegor and Beni Kristo are leading a Flinch Conference Saturday Riskursion, Albanian Immersion and International Express, in which participants will enter the world of recent Albanian immigrants and church-planting efforts among them. If you plan to attend Flinch Conference, you can use this link to register for the Riskursion.

This story, which also appeared on the Flinch Blog, was published in GraceConnect eNews. To subscribe to the weekly e-newsletter that includes news and information from congregations in the Fellowship of Grace Brethren Churches, click here.