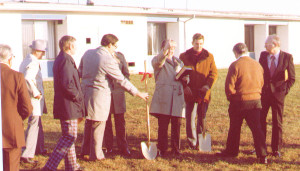 Brethren Christian School broke ground for their new building in 1980. (The school closed in 1998.) That building is now being razed for a new facility at the Grace Brethren Church, Osceola.

An open house is planned for former students of Brethren Christian School in Osceola, Ind., which closed in 1998. Hosted by the Grace Brethren Church in Osceola, the school began in the 1950s and graduated its first class in the early 1960s.

The facilities where the school was located are being razed as part of a renovation and expansion project at the church. Former students are invited to take one last walk through the buildings before they are torn down.

The open house will be held 2-5 p.m., October 22 at 58343 S. Apple Road, Osceola. No RSVP’s are needed, according to Greg Serafino, current pastor of Osceola Grace.

Located at 58343 S. Apple Road, Osceola, the building has been used by the Osceola church for children’s ministries and other purposes over the last 17 years. After the open house, the school classroom building will be razed, along with a section between the old gymnasium, offices and music classrooms and the old cafeteria, school offices, and classrooms, according to Serafino.

Building housing Brethren Christian School after its construction in the 1980s.

“The 10,000 square foot gymnasium, which has been used as our worship auditorium for the last 35 years, will now be our new Commons Area with a cafe and indoor playground, along with the new Worship Center, which will also have space for various church and community ministries,” reports Serafino.

Serafino says that the school “hit its stride in the mid 70’s and then other Christian Schools began to pop up. At one time there were students who came from as far away as Winona Lake, Ind., and Niles, Mich.”

Once Christian schools were begun in those areas, attendance at Brethren Christian School dropped, he added.

Follow the construction of the new facility at the Grace Brethren Church, Osceola, Ind., at their Facebook page, Growing 2 Glorify.