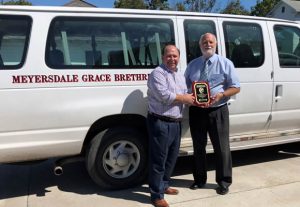 Each year, Operation Barnabas leaders and staff select an individual, group, or church to receive an award named in honor of Roger Ward (Grace Brethren Church, Norwalk, Calif.). While the students on OB are being trained in what it means to be “a son or daughter of encouragement,” there are people who far out-serve the teams with their kindness and generosity.

In the summer of 1979, Roger Ward showed himself to be one of those people. He gave his own personal vehicle, supplied fuel for the vehicle, and was continually helping the team that year. After his home-going due to an accident at his business, CE National named this service award after Roger in honor of a life devoted to serving others more than self.

CE National has announced the 2019 Roger Ward Memorial Award was presented to the Meyersdale Grace Brethren Church in Meyersdale, Pa. (Randy Haulk, pastor), for their gracious demonstration of servanthood to one of the OB teams.