The subject of a story in the Goshen, Ind., News, credits her church, Osceola Grace Brethren Church, for helping her clean up following recent flooding in her home. Lisa Sluder expressed gratitude for the help of people from her church. A portion of the story appears below. To read the complete article, click here. 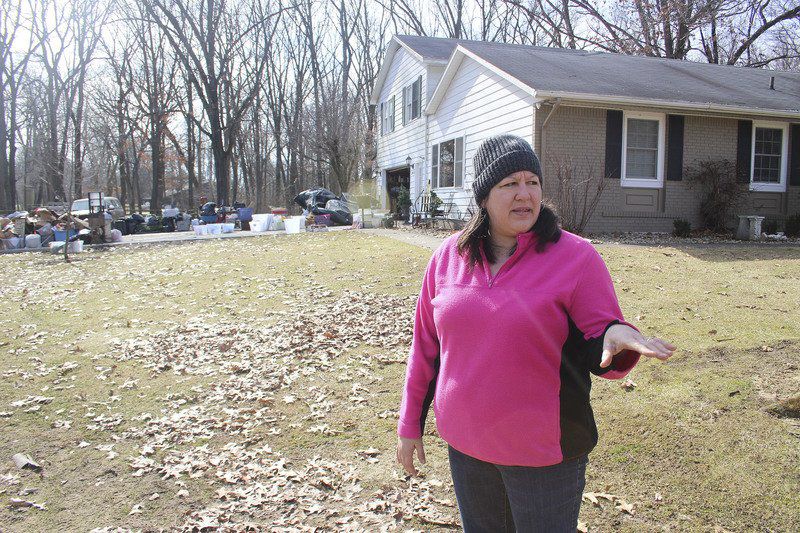 Lisa Sluder, Osceola, Ind., talks about being evacuated from her home due to recent flooding in Elkhart County, Ind.

OSCEOLA — Her basement was drenched in four feet of water. The road in front of her home was nearly washed away. Yet despite all the damage resulting from last week’s major flooding event, Osceola’s Lisa Sluder is keeping a surprisingly positive outlook.

“It was pretty much a raging river through here, and it actually collapsed the street because of the rapid water taking out the foundation,” Sluder said of the flooding while taking a break from rummaging through piles of soggy belongings rescued from her home at 30874 Creekwood Terrace in Osceola late Tuesday morning, “Basically as the water rose the three houses around me were just nothing but islands. One of the houses actually had water all the way up to their basement ceiling, and then in our home we had four feet of water. So right now I’m just cleaning out our mess.” …

Sluder said it took four days for the water to finally recede from her home, with Tuesday marking the first opportunity she’s had to really dig in and begin sorting the salvageable from the unsalvageable.

“And my beautiful church, Osceola Grace Brethren Church, they had a dozen guys and gals come out and help us take stuff out of the house. A couple days before that I was like, ‘No, I don’t need help,’ because I had to get over my own pride. But then I was like, ‘OK, I’m ready for help!’ So I’m really thankful to them,” Sluder said of the ongoing cleanup effort. “And beyond that, another great thing that’s come out of this is our neighbors, we’ve really gotten to know each other better, and help each other, and just be there for one another, where in this day and age many people don’t really know their neighbors. So this has kind of forced a good thing I guess.”