Osceola Float Distributes Candy, After All 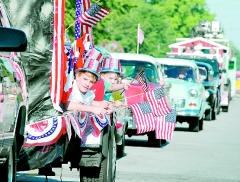 The Grace Brethren Church of Osceola, IN, thought they wouldn’t be able to distribute candy from the church’s float in yesterday’s annual Memorial Day parade. (South Bend Tribune photo by Greg Swiercz)

But it all worked out well, after all. Here are several paragraphs from the Tribune story. To read the entire article, click here.

Robyn and Jon Carter had already told their children, Emily, 4, and Camden, 13 months, there would be no candy.

The Carters’ church, Osceola Grace Brethren, had a float to promote its Bible school program, she said. But, without the candy, the group had to be content with handing out brochures along the parade route.

“There’d been a suggestion that parade participants should walk with bags and hand out candy to keep kids from running into the street,” Jon Carter said. “But I don’t know if it’s any more than a suggestion.”

What he had heard turned out to be true.

There were people walking in the parade who were handing candy to the children.

A compromise was found, and smiles ensued.