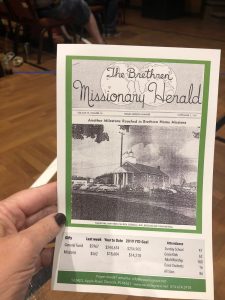 Over the weekend, Grace Church, Osceola, Ind. (Greg Serafino, senior pastor) noted it’s 90th year with a special service. The bulletin included a reproduction of a cover from a 1951 Brethren Missionary Herald magazine announcing the self-supporting status of the church.

Dan and Rachel Jackson,  Timothy (TK) Kurtanek, and Tom and Sharon Stallter were special guests. Rachel is the daughter of the late Pastor Gordon and Agnes Bracker, grew up in the church, and met Dan there. They were sent by the church to Germany as missionaries in the late 1980s. Tom Stallter also grew up at Osceola Grace and he and Sharon were supported as missionaries in CAR and CHAD. There also were “video guest appearances” by previous pastors Scott Distler and Dan O’Deens.

Timothy (TK) Kurtanek, who has been supported by the church and frequently brought Operation Barnabas teams to the church, had a gift for Pastor Greg Serafino. TK told the story of a ring that was in the love offering TK received at the church. It was an Adidas ring, given by a young man who had nothing else to give, so he put his most prized possession in the plate. TK kept it and presented it to Greg yesterday.

The day ended with a luncheon on the church grounds.

Click below to see a video which highlights the history of the church.