Out of Death… Life! 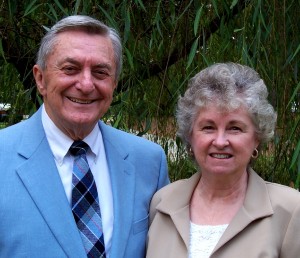 Years ago, during the National Conference in Montana, my wife and I visited Yellowstone National Park. Much of the park’s beauty had been burnt black from previous forest fires. However, upon closer inspection, we noticed here and there tiny shoots of greenery poking through the charred landscape. I was reminded of the words of Jesus: “Unless a kernel of wheat is planted in the soil and dies, it remains alone  But its death will produce many kernels — a plentiful harvest of new lives” (John 12:24 NLB.)  In a similar vein, this seems to have been the pattern of evangelism in our fellowship of churches over the years.

Around 1948 the National Conference of the Fellowship of Grace Brethren Churches (FGBC) created the Board of Evangelism.  Some gifted men became itinerant evangelists, traveling and conducting evangelistic and/or revival crusades in many of our churches across the United States. Many decisions for Christ were recorded. It was my great privilege to serve several years in this outreach model.

In 1973, leaders of all our FGBC major boards came together to launch a program of personal evangelism similar to those other denominations were initiating. We called ours GROW ’73, God Reaching Our World. (My assignment was to contribute articles on the importance and relevance of prayer.) Statistics reveal significant numerical growth in our churches during those years. The Grow ’73 program later became Grow ’74, ’75 etc., and then slowly passed off the scene.

During the 1980s, seeking God’s wisdom for a fresh evangelistic thrust, members of the Brethren Board of Evangelism (renamed Brethren Evangelistic Ministries) became acquainted with Evangelism in Depth (EID), a ministry that had previously borne much fruit in Central America. Our team was discipled by a pioneer and leader of the Latin America Mission of Mexico.  More than 70 Grace Brethren churches hosted what we called First Love Renewal seminars. Churches in Puerto Rico, Guatemala, Argentina, and later, the Central African Republic, were included.

Despite the closing of Brethren Evangelistic Ministries in the 1990’s, evangelism continued to be alive and well in many parts of the world. Two of the EID seminar leaders included pastors George Traub and Ed Waken, who today have healthy, growing churches. Tony DeRosa, a lay leader from the BEM board, felt led to continue this ministry.  Under his leadership, EID is now actively working in nine countries. Thousands of believers have been taught the Biblical concepts and principles and have experienced a new-found freedom in sharing the Gospel. Multitudes of people have been saved as a direct result. God has kept the spirit and passion of evangelism alive in many parts of the world.

Evangelism has also been at the forefront in a number of our FGBC National Conferences and among Grace Brethren organizations such as CE National under the leadership of Ed Lewis. Reports have been received of churches in our fellowship that God is blessing with abundant conversion growth.

One of my prayers as I approached retirement was for God to allow my wife and me to be part of a church that turned outward toward a spiritually hungry world. God led us first to the Grace Church of Aiken, S.C. (Steve Taylor, pastor) where the people lovingly invite others and bountifully support world evangelization. Now that we have permanently retired in Tennessee, God has placed us in the Fountain of Life Bible Church in Johnson City (Vic Young, pastor) where evangelism is at the core of its very existence.

I thank and praise God for the spiritual harvest that is taking place in various corners of our world and for the fruit He is producing in the hearts and lives of many Grace Brethren people. Truly, out of death has come new life. The organization and the messenger may die, but the message of the Gospel goes on as God uses willing hearts everywhere to bring lost people to Himself. — Ron Thompson

—
The BMH tract, Life’s Most Important Question was developed during the Grow ’73 initiative. The tract is available in NIV, KJV and the Spanish language editions. Click here to order copies.

To send a note of encouragement to Ron Thompson, click here.