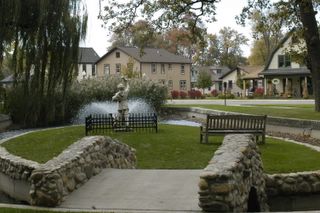 The recently-reborn Village At Winona in Winona Lake, IN (Al Disbro photo) was featured in this morning’s Fort Wayne Journal Gazette newspaper. Here is the article:

The boats are neatly tied up at the docks, the fountains spray glistening droplets in the sun, and the tourists are smiling as they wander among the shops.

It’s just another postcard-perfect day in the Village at Winona’s artisan court.

But the quaint, well-manicured village, nestled between Winona Lake and the hill that’s home to Grace College and Seminary, is tougher than it looks.

The former religious revival town has been reborn as a charming resort, after surviving a slide into decay and a steep climb back up again, in between.

In 1999, the first 10 retailers opened in the area bordered by Canal Street and Park Avenue, in homes that were restored and, in some cases, moved to the old Chautauqua Assembly grounds from other spots in the village.

Now there are 18 shops, including the Boathouse Restaurant and the Billy Sunday Home & Visitors Center. Meanwhile, the former Winona Hotel has been renovated into condos.

Most of the shops have large wooden porches and matching vintage-looking mailboxes.

Many of them also have some original flooring and architectural elements, such as built-in cabinets, ornate archways and stairwells.

And like every resort area, tiny Winona Lake seems a world away from the humdrum existence of daily life, although it’s less than an hour from Fort Wayne.

“There’s a magic out here. You feel like you’re on vacation,” even if you’re not, says business owner Nancy Gast, trying to sum up the village’s appeal.

Down the street, Gast’s family opened the Trailhouse bike shop four years ago. They’ve also owned the Tarkio Road bike shop in Warsaw, where they live, for 30 years.

They sell, repair and rent bikes for those who want to pedal around the lake or hit the trails.

You get a better view from a bike and you can cover more ground, Gast says.

“You just absorb it. Very few people come back without a smile.”

The mountain biking and hiking trails run for 10 miles over private land that used to be a Chicago Boys Club summer camp, she says, where it’s not uncommon to see deer, owls and red fox lurking in the woods.

Trailhouse has brought in several sanctioned mountain bike races in the past few years.

The community’s passion for biking and being active outdoors is “a nice complement to the art and creativity,” she says.

At Nicole Moore’s shop on Canal Street, it’s all about the art.

Moore, a watercolor artist who grew up in Columbia City, opened her whimsical shop of home decor and gift items a year ago.

“It’s just fun. It has such character (and) creaky old floors,” she says, looking around her shop.

Glass ornaments dangle from the empty panes of a door frame, homemade journals fill a shelf.

During the months of August through December, weekend traffic in the shops is crazy with bus tours, residents and event participants.

The village has a year-round population of about 4,000 and draws 40,000 to 50,000 tourists, with most of them visiting during the summer months.

The Village at Winona has a full calendar of festivals and concerts in the summer and retailers here must agree to stay open for set hours, seven days a week, during that time.

The only really quiet months Moore has had during the past year were January and February, which gave her plenty of time to work on her own art for the upcoming season.

She’s glad she decided to open her business at the Village at Winona, instead of in Indianapolis, as she originally had planned.

The village grounds are immaculate and everyone works to keep it that way, business owners say.

“It really makes you proud to be from this area. I have the best job in the world,” Moore says.

On one side of her shop is Merrilee’s produce stand, which opened in May, while Trailhouse sits on the other side.

Down the street is the Canal Street Gallery, one of several in the artisan court.

She also sells beads, which are stored in eight huge drawers, and are one of her most lucrative items.

She’s glad to have a lucrative item, but is a bit disappointed that it’s not fine art, which has proven to be more difficult to sell than she thought it would.

“That’s been discouraging. Most of us have gone to the sort of bread-and-butter stuff – that’s not where our hearts are.”

That said, Eisenbraun loves the fact that she can connect people with art, both by encouraging artists by selling their work and matching customers “with something that looks good and makes them feel good,” she says.

“I never knew I wanted to own a gallery; I should have done that all along,” she says laughing.

Eisenbraun, a former marriage and family counselor who had a private practice, helped open the gallery six years ago, making it one of the founding businesses of the artisan court.

The Village at Winona is managed by Winona Restoration Partners, LLC.

He and three others started the neighborhood partnership in 1992.

“Our goal was to arrest the slide, by reconverting multi-family properties back into single-family, owner-occupied properties,” he says.

In 1994, he and Dane Miller bought out the other partners and purchased several properties.

In 1997, they bought the Chautauqua Assembly grounds from Grace College, which had owned the property since the mid-1960s, he says.

“The goal was more quality of life and restoring some of the Chautauqua programming. The means to that end was (establishing) the retail shops and restaurants.”

Eventually, he’d like to get about 30 retailers at the Village at Winona Lake.

“I suppose we have room to put 150 shops in, (but) if we have the kind of demand that would support that, I wouldn’t want to live there,” he says.

Any incoming business in the Village at Winona must meet certain criteria, and its product has to fit in with the partnership’s overall vision.

“A bike shop fits, because of where we’re located and the historic ties to cycling. A tattoo parlor probably wouldn’t,” Wilcoxson says.

The owners must be providing a marketable product that people want and they must be dedicated to working the established retail hours.

Finally, they must have the financial capability to survive a year or two without a major profit, he says.

At this point, he doesn’t have any more buildings ready. So any new business would have to wait a few months to open.

Longtime resident Terri Zielasko says her business wouldn’t meet all of those criteria, which is why she opened the Pink Poodle Boutique on her own property last fall.

She sells dog clothing, beds, leashes and toys – plus a few items for their two-footed companions, including hand-felted handbags, which are knitted with wool.

Visitors to the tiny shop are greeted first by the pink poodle doormat, then with enthusiastic barks from her dogs, Zoe, Lacy and Chove, who hang out with her behind the counter.

“I love pink and I love poodles,” Zielasko says with a grin.

Stuffed pink poodles are tucked onto a shelf by the door.

Her dog Zoe, a gray toy poodle, models a pink “Spicy Girl” top. Other outfits hanging on the wall read “Bad to the Bone” and “Diva Dog.”

On Tennis Street, Zielasko is just a few blocks from the artisan court.

And she’s seen it all. As a child, when she came to Winona Lake to visit her grandparents, she saw the village in its glory days.

“It was really sad to see it degrade,” she says.

She attended Grace College and settled at the Village at Winona Lake with her husband, Jim.

“We lived through the dirt roads and the big potholes (from construction for the restoration project). But it was worth it. It’s just a wonderful place to be. We love Winona,” she says.

Deena Cutshall of Warsaw, whose family owns Pottery Bayou on Park Avenue in the artisan court, is another fan.

The store opened 15 months ago to take advantage of the creative atmosphere.

Actually, if they couldn’t open in the village, they might not have opened anywhere, she says.

Her customers come from all over the county, and beyond. There are tourists, residents celebrating birthdays and family reunions and the occasional corporate team-building retreat.

The restoration project is “a well-thought out business venture,” she says, while sitting on the shop’s porch.

And one that was sorely needed.

“Fifteen years ago, you wouldn’t walk down here at night,” she says.

Buildings were decaying and the village had a sad, down-at-the-mouth air about it.

Maybe its history ultimately saved it, she muses.

And once again, Winona Lake is a popular destination spot, just like it was in its (first) heyday.

“Coming to work is such a joy. It is a charmed little life,” Cutshall says.

American Lyceum Lecture Series: Talk-radio host Michael Reagan, son of President Ronald Reagan, will speak at 7:30 p.m. on Oct. 20 at Rodeheaver Auditorium. The lecture is free and open to the public.