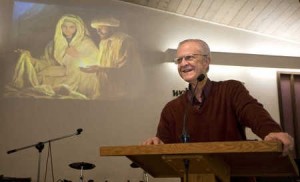 ROSS COURTNEY/Yakima Herald-Republic. Pastor Paul Guay plans to return from back surgery to remove a cancerous tumor earlier this month to preach the Christmas Day sermon at his Mabton Grace Fellowship Church, just like he bounced back from three other cancer surgeries in the past decade.

Over the past 10 years, Paul Guay, senior pastor of the Mabton Grace Fellowship Church, has recovered from three nose and throat surgeries, plus a vocal chord illness, to resume preaching.

Now, he plans to take the pulpit Christmas Sunday just three weeks after a back surgery to remove a cancerous tumor that splintered one of his vertebrae.

The 69-year-old minister believes his history of rapid recoveries means God still has work for him.

Either the four-hour Dec. 3 surgery or the tumor could have paralyzed him. The growth had been causing excruciating pain for months.

Doctors removed the tumor and stabilized his injured back with a titanium brace, wrapping up in the wee hours of the morning. Guay was walking later that afternoon and came home within days, completely skipping intense physical therapy his doctors figured he was in for.

This week, he began walking without a cane and ascended the two steps to his pulpit after joking that he might need someone to carry him.

Guay’s comeback ought to surprise no one:

* In 2004, he began noticing weakness in his voice. A Yakima ear, nose and throat specialist diagnosed him with spasmodic dysphonia, a fluttering of his vocal chords. He treats it with Botox shots two or three times a year.

*In 2005, doctors found a cancerous tumor in his sinuses and removed it surgically, followed by radiation and chemotherapy at North Star Lodge.

* In 2007, the sinus tumor came back on the right side of his neck — this time it was cancer of the lymph nodes. He had another round of radiation and chemotherapy, plus surgery on his neck that removed many of his nerve endings and one of his jugular veins, leaving him light-headed sometimes when he stands up too fast.

During all those spells, he never missed delivering a Sunday sermon, though he occasionally sat down to preach, resting his heavily highlighted Bible on a miniature pulpit made by a congregation member.

And Guay does more than preach. He visits families of newborns before they leave the hospital and officiates weddings of his congregation’s family members as far away as Maryland.