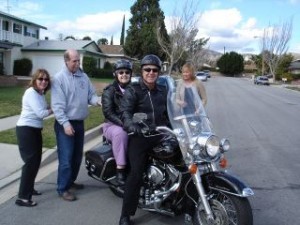 Pastor John McIntosh took his mother, Martha, for a motorcycle ride on her 87th birthday in 2006. On that occasion John said, ““I am grateful for my three brothers and their love for God and people. A big chunk of this love emerged from the soul of our godly mother, Martha.”

SIMI VALLEY, CA – Martha McIntosh, 91, went to be with the Lord from her home on April 23, 2010, in Simi Valley, California after a short illness.

Martha Frances Blair was born on February 18, 1919 to L. D. and Julia Blair of Sutherlin, Virginia. She received her Registered Nurse degree in Spokane, Washington in 1946 and married Robert W. McIntosh on June 14, 1947.

Martha was preceded in death by her husband in 1993. Together they owned and operated the Ball Memorial Chapel in Sunnyside, Washington and McIntosh Funeral Home of Prosser, Washington. Martha also worked at the Sunnyside Memorial Hospital for many years.