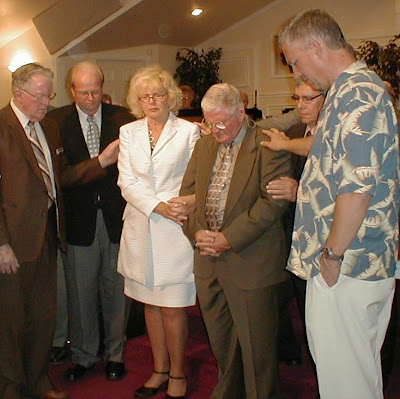 Paul Rhodes was installed as the pastor of the Grace Brethren Church of Chico, Calif. during a special service on May 20.

Previously, Paul served as an associate pastor of the Neighborhood Church in Chico. It was fitting that the pastor of that church began the service with comments of releasing Paul to another church in the community. Pastor Larry Lane expressed how hard that was but reminded us that we are not to think in terms of our own little empire but in terms of the kingdom.

Pastor Joel Richards, representing the Nor-Cal District of Grace Brethren Churches and the Association of Grace Brethren Ministers, was the keynote speaker. His message centered in Acts 13 and how the Holy Spirit calls us, sets us apart for particular ministry and confirms that call through various means. Since Paul had served in the Chico church many years ago under the ministry of Lloyd Woolman, it seemed only fitting and a work of God that he was now called back to be the senior pastor.

Pastor Rhodes call was officially certified by a reading of the minutes. After various pledges by both Paul and his wife Andrea, and by the congregation, the leaders of the church laid hands on their new pastor. They were joined by Pastor Lane and Pastor Richards.

Pastor Rhodes gave a brief challenge to the congregation and promised that he would lead them without oppressing them.