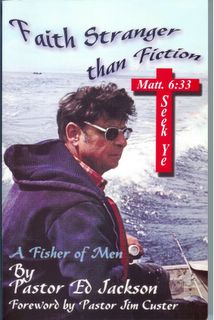 Recently this writer had the pleasure of receiving a copy of Ed Jackson’s Faith Stranger than Fiction: A Fisher of Men. The book was so enjoyable that he thought it fitting to write a review.

Ed Jackson is well-known within Grace Brethren circles. Some who grew up in this Fellowship heard Ed speak to their church, their youth group, or their Grace Brethren Boys chapter. Many remark that they heard Ed speak while dressed in the uniform of an Ohio State Trooper, an organization he served with distinction for over 20 years.

Others know Ed as a tireless and creative church planter. After resigning from the Ohio State Highway Patrol in 1970, Ed served several years as a church planter in Alaska, Ohio, and Florida. Indeed, Ed began the entire Grace Brethren church planting effort in Alaska. All of the current and former Alaskan FGBC churches were either planted by Ed Jackson or by one of the churches he founded.

He founded the Grace Brethren Boys in 1972. He also served as an interim pastor, on several National Organization boards, and as the Director of Church Planting for Grace Brethren Home Missions (now called Grace Brethren North American Missions).

Ed also served as a United States Marine during World War II. He was stationed aboard the attack transport USS Hugh L. Scott, and saw action in the Pacific.

Faith Stranger than Fiction is an autobiography. Ed wrote this book in a conversational style. It reads as if Ed were sitting in your living room telling stories. But the stories are not the typical “There I Was” war stories. Ed writes with a great authority but also with great humility. He writes of his failures as well as his successes. Ed is careful to give glory and thanks to the God Who made it all possible.

Perhaps the most challenging aspect about Faith Stranger than Fiction is Ed’s energy. Simply put, he never stops. No matter where Ed served, and he served in many roles, he always found time to proclaim the Name of Christ, serve Him, and serve others.

Another great encouragement to the Christian reader is God’s answers to Ed’s prayers. Ed carefully details many specific prayers and equally specific answers. One cannot help but be challenged by his faith in God and God’s timely answers.

Ed Jackson’s Faith Stranger than Fiction is an excellent book. It is easy to read because of its conversational style. It is challenging because the author possesses almost inexhaustible energy.

Faith Stranger than Fiction ultimately glorifies God, because Ed Jackson is truly a man of great faith and wisdom who points the way to the Lord Jesus. The Lord told one of the centurions, “I tell you, I have not found such great faith even in Israel” (Luke 7:9). Ed is also a “centurion” because of his military and police background as well as his faith.

Faith Stranger than Fiction is privately printed by Evangel Press. It is available through the Powell Grace Brethren Church, 7600 Liberty Road, Powell OH 43065. The book can be ordered at grace@gbcpowell.org. The Powell church suggests a $10 donation for the book.